Ezra Klein wants you to know that the “conventional wisdom on Washington,” that “corporations win every fight and everyone else—particularly the poor—gets shafted,” is “wrong, or at least incomplete.” The “comforting” fact, according to Klein, is that the ”altruists” who champion the poor have “quite a lot” of political power, “at least in recent years.” Not the poor themselves, it goes without saying, but “the people, and the political party, most concerned” with improving their lot.

If this is an indirect way of saying that Democrats have accomplished some important things in the past five years, fair enough. In support of his view, Klein notes that Obamacare is scheduled to deliver a lot of very expensive health care to poor and working class people over the next decade, paid for partly with new taxes on top income earners. That’s true, and hugely important (though a significant slice of that expense reflects solicitude for insurers and health care providers—corporations).

Klein also notes that spending on food stamps has increased a lot. That’s also true, but less relevant, since the escalating cost is due to escalating need, hardly evidence of anyone’s political clout.

What Klein seems to me to be missing here is the big economic and political context in which class politics has played out “in recent years.” Here is what has happened to the net wealth of people at different points in the U.S. wealth distribution over the past decade (from a recent paper by Fabian Pfeffer, Sheldon Danziger, and Robert Schoeni): 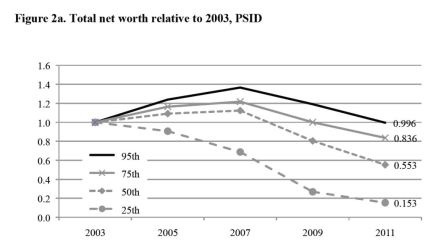 Stop a moment to think about what those numbers are telling us. Millions of people in the bottom tier of the working class have lost, on average, 85% of their net worth. (Their average net wealth, which was already falling before the onset of the Great Recession, went from $6700 as recently as 2007 to $1500 in 2011). People even lower in the wealth distribution don’t appear in the graph because their net worth was negative all along; but in real terms, they have been hit even harder (at the 5th percentile, $39,000 in debt in 2011 as compared with $13,000 in 2007). Meanwhile, those near the top of the wealth distribution have been held harmless.

Against that background, it seems  more than a little bit obtuse to celebrate the “often overlooked” power of “the people, and the political party, most concerned with directly improving the lot of the poor.”