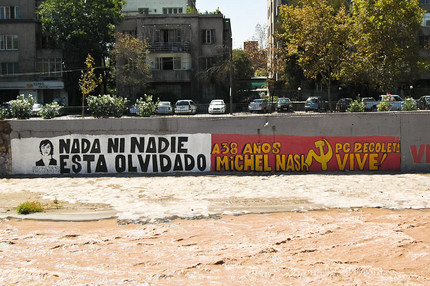 If trees had the capacity for language, the towering Ombu off Avda Jose Arrieta on the outskirts of the Chilean capital of Santiago would tell a tale of brutality and redemption, of nature’s capacity to forget, and man’s determination to remember.

The tree is one of the last vestiges of Villa Grimaldi, a former artist’s retreat that was used in the early 1970s by General Augusto Pinochet’s secret police to house and torture more than 4,000 political prisoners – including the former president, Michelle Bachelet, who paid the price for her father’s service in the air force of deposed President Salvador Allende.

A “Peace Park” now surrounds the tree; and for a visitor enjoying its tranquility, it’s easy to forget that between 1973 and 1978, at least 240 political prisoners were “disappeared” from the Villa. Some of them took their final breaths blindfolded beneath the Ombu’s knotted bough, or hanging from its majestic branches.

Today Chileans are gathering together to commemorate the day four decades ago when the Army that was pledged to protect them laid waste to La Moneda and took power from their elected government. The coup ended within hours with Allende’s death, and inaugurated a two decade-long U.S.-backed military dictatorship that witnessed tens of thousands of Chileans tossed into interrogation centers around the nation. Many would never emerge.

The United States has never officially acknowledged its role in that coup.

Pinochet died in 2006 without ever answering for his crimes. But Chile has been coming to grips with the destructive legacy of its years under the military junta. According to a recent poll, 41 percent of Chileans now place responsibility for the coup at the feet of Pinochet – up 17 points from the last time the question was asked, three years before the general’s death. And only 16 percent of Chileans now say the military was justified in taking power – a 20-point drop over the past decade.

In two well-timed moves last week, Chile’s conservative President Sebastian Pinera made a plea for “truth and justice,” asking anyone with information about those forcibly disappeared by the junta to come forward; and Chile’s judiciary formally apologized for its complicity in covering up state-sanctioned disappearances, torture and murder.

“It must be said and recognized clearly and completely: the court system and especially the Supreme Court at that time, failed in their roles as safeguards of basic human rights, and to protest those who were victims of state abuse,” the Chilean Judges’ Association said in a statement.

And yet, despite the well-documented complicity of the U.S. government in Pinochet’s path to power – a role that was acknowledged as far back as 1975 by former President Richard Nixon, and confirmed by the CIA in 2009– the U.S. has steadfastly refused to officially recognize any responsibility for the coup and its aftermath. (A U.S. envoy was disavowed by President Carter and labeled a communist in the press after he took it upon himself to apologize during a 1977 United Nations meeting.)

During his first term in office, President Obama was pushed on two occasions to issue an apology for U.S. involvement. Both times he refused.

It’s understandable to question the benefit of a leader personally apologizing for the sins of a predecessor; and indeed, the President publicly kowtowing for a deed that took place when he was still in high school would gain him little. But a nation is an entity that exists above and beyond the lives of its leaders, and sometimes it is necessary for elected officials to address past mistakes, even when the measurable benefits of doing so are limited.

Earlier this year David Cameron became the first Prime Minister to recognize Britain’s killing of Indian protesters in 1919. The move was one of good will directed toward an ally with whom the United Kingdom shares a common history, not something with an expectation of direct political payoff.

Chile is well on its way to becoming the first “developed” nation in Latin America. Obama should heed President Pinera’s call for “truth and justice,” and finally put to rest a dark chapter in U.S. history.

Perhaps most importantly, for a leader struggling to convince the world that his foreign policy choices are grounded in good faith, it couldn’t hurt to demonstrate that he knows what it looks like when they are not. As the nation considers U.S. intervention in the Middle East, it might do the president well to reflect on the mistakes his predecessors made in Latin America.

Christopher Moraff is based in Philadelphia and covers national politics, social justice, and consumer issues for a number of publications, including The American Prospect, The Philadelphia Inquirer, and Philadelphia magazine.