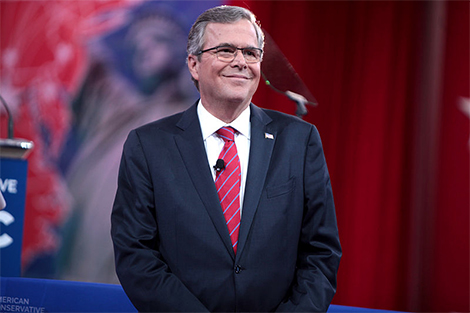 I reported at Lunch Buffet Matt Yglesias’ suggestion that Jeb Bush didn’t seem to have any specific ideas on how to generate either the longer working hours or the levels of economic growth he talked in his gaffe-tastic New Hampshire comments. But Greg Sargent argues the opposite: we know exactly what his basic prescription for the economy is, because it’s the same one Republicans have been promoting for such a long time:

[W]hat’s really important here is Bush’s apparent overall economic diagnosis: the grand answer is lowering taxes — including at the top — which will trigger runaway growth that will solve those problems, including the gap between productivity and wages.

Indeed, later in the [NH] interview, Bush said that to accomplish this, we must dramatically simplify the tax code, which includes “lowering rates.” Bush then went on at length about how cutting taxes and “reducing the size of government” and “shifting power away from Washington” are the economic cure we need. The follow-up question for Bush is: Does this mean one of your solutions for American workers is lowering the tax burden for those at the top?

Yes, of course it is. Otherwise we might have to conclude Bush doesn’t care about regular American workers at all, and that wouldn’t be fair, would it?