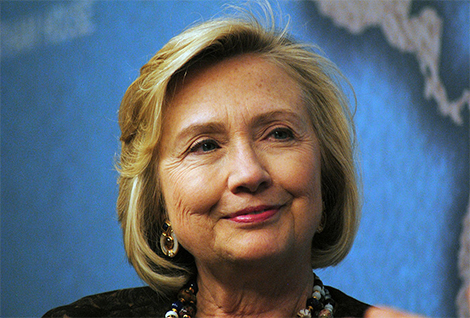 Hillary Clinton’s big economic speech yesterday at the New School didn’t get the kind of attention one might have expected, in part because of competing news events. And it got some ho-hums from political reporters who quickly checked off the big specific proposals in it (e.g., pre-K and paid family leave) as stuff she’s already talked about. Interesting how a pretty impressive level of populist rhetoric (e.g., jailing bankers) is now taken for granted.

As one might expect, some of the more provocative ideas kicked around in HRC’s speech are the least developed. She broke from the old-school center-left mold by emphasizing the erosion of collective bargaining rights as a factor depressing middle-income wages. She also touched on a daily reality you hear little about from policymakers: the deliberate reclassification of employees as “independent contractors” to deny them employee benefits.

Offline I observed some heated debates between progressives over a couple of items in HRC’s speech, notably her endorsement of tweaks in the tax code to encourage less “short-termism,” the corporate obsession with quick shareholder gains at the expense of investment; you can make the argument that taxing dividends and capital gains generally at ordinary rates is a simpler and more revenue-positive way to get at that problem. And there were a few chestnuts in the speech that triggered even my gag reflex: no, please, let’s don’t bring back “empowerment zones,” one of the least impressive policy initiatives of the Clinton administration.

But all in all, HRC’s speech reflected a consensus of liberal economic ideas that survived a vetting by pollsters, and will nicely mesh with her long-standing commitments to gender equality. Having just helped run a symposium on Stan Greenberg’s findings on political reform as a prerequisite for white working class acceptance of Democratic economic initiatives, I’m disappointed she didn’t fold in some of her earlier discussion of the poisonous effects of Citizens United, but that can be cured later.

And in the end, for anyone craving more “populism” from HRC, it’s helpful to keep an eye on the GOP competition, viz. this comment yesterday from shiny new official presidential candidate Scott Walker in an interview with Sean Hannity:

The left claims that they’re for American workers and they’ve just got just really lame ideas — things like the minimum wage.