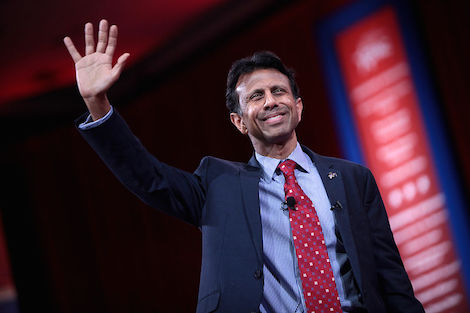 In responding to the shootings in Lafeyette last night, Louisiana Gov. Bobby Jindal has, so far as I can tell, said and done all the appropriate things–comforting the victims, praising the injured teachers who apparently risked their lives to protect others, refusing to get into big picture ruminations until the immediate trauma has subsided.

I’m glad to see it, since Jindal has distinguished himself as an official and before that an unofficial presidential candidate by a monomaniacal message discipline that goes over the edge into message bondage. It’s gotten so bad that BuzzFeed’s Christoper Massie has strung together a vast number of video and audio clips with Bobby saying the exact same words on three different topics appearance after appearance and day after day. I mean, all candidates do that to some extent, but this is really above and beyond the call of reason.

Maybe having broken his self-hypnosis during the current tragedy, Jindal can assume a more natural style going forward. After all, what’s the point of being the smartest candidate if you turn off your brain the moment your mouth opens?