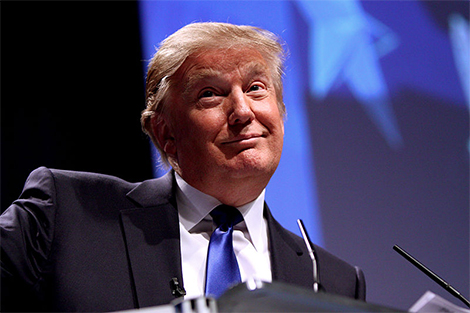 One of the reassuring mantras Republicans are telling themselves about Donald Trump is that he doesn’t have the money to self-fund an independent presidential campaign. Articles like one in Politico yesterday from Hadas Gold will help them sleep better at night.

Donald Trump made a bold pledge during his rambling presidential announcement inside the brass-laden, marble-filled lobby of Trump Tower. “I’m using my own money. I’m not using the lobbyists. I’m not using donors. I don’t care. I’m really rich,” he said.

While it’s true that Trump is really rich, the real estate mogul’s financial disclosure made public this week casts doubt on the idea that he has access to enough cash right now to spend the $1.5 billion or more it’s expected to cost to reach the White House in 2016.

You will note the planted axiom there. It’s one repeated through the piece.

Three estimates calculated after the release of the document on Wednesday put the upper limit of his cash and liquid assets at roughly $300 million. That’s plenty of money to get him a long way, but not necessarily all the way to November 2016, if he doesn’t implode first….

In 2012, Mitt Romney and President Barack Obama’s campaigns spent about $1 billion each, and the 2016 election is on pace to beat that handily, especially with what will likely be a long and contentious primary race.

I say that not just because Trump is Trump, but because we’ve yet to see the kind of money that could enable an indie or third-party candidate defeat both of the two major parties.

So if having a serious chance of winning is a prerequisite for Trump running as an indie, then we can stop talking about money. But I see no reason to assume that’s the criteria he will follow.

Trump very clearly enjoys the attention he’s already getting as a presidential candidate absolutely no one thinks will be inaugurated in January of 2017. He’s especially seems to enjoy tormenting his fellow candidates, and freaking out the leadership of the Republican Party.

He can do that with a lot less than $1.5 billion, or even $300 million. As you may have noticed, he’s getting tens of millions of dollars of “earned media” every day without spending a significant amount of money, so far as we can tell. Nate Silver calls him “the world’s greatest troll,” exceptionally skilled at creating a multi-media buzz that feeds on itself.

The key question is whether Trump wants to run as an indie candidate, not whether he can. And since an indie run would probably get him precisely the kind of regular attention he’s getting now, I don’t know why he wouldn’t give it a whirl. It’s not like he’s going to be laying a foundation for 2020 or 2024.