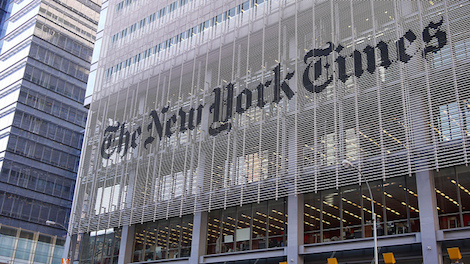 As you may recall, late last week the New York Times got itself into all kinds of hot water by running an inflammatory story with an inflammatory headline suggesting that Hillary Clinton was being investigated by the Justice Department for possible crimes she committed in dealing with State Department matters in her personal email while Secretary of State. Almost immediately, though, the Times began back-peddling and fudging up the accusations, particularly after the Justice Department announces it was doing no such thing. The whole thing richly earned the Times cross-fire from Democrats who thought the paper in its zeal to Get Hillary leaped ahead of its information and got caught, and from Republicans who thought the back-peddling was typical liberal protection of HRC.

So the Times‘ Public Editor Margaret Sullivan investigated the “mess” as she called it and reached a verdict much closer to the Democratic version of what happened, though clearly the reporters involved blamed it all on a highly placed source who turned out to be not-so-reliable.

When you add together the lack of accountability that comes with anonymous sources, along with no ability to examine the referral itself, and then mix in the ever-faster pace of competitive reporting for the web, you’ve got a mistake waiting to happen. Or, in this case, several mistakes.

Reporting a less sensational version of the story, with a headline that did not include the word “criminal,” and continuing to develop it the next day would have been a wise play. Better yet: Waiting until the next day to publish anything at all.

Losing the story to another news outlet would have been a far, far better outcome than publishing an unfair story and damaging The Times’s reputation for accuracy.

What’s more, when mistakes inevitably happen, The Times needs to be much more transparent with readers about what is going on. Just revising the story, and figuring out the corrections later, doesn’t cut it.

Yep, that about covers it. There remains, inevitably, the High Politics of how the Times wants itself to be perceived in a political world where objectivity is largely thought to be impossible. Maybe the latest Hillary story’s handling was an honest mistake, or maybe it’s just about competition for a scoop, or maybe at some level–conscious or unconscious, and individual or collective–the Liberal Paper of Record would like a major Democratic scalp to brandish every time–and it probably occurs once a minute–it’s accused of being biased.

I’m probably not the one to ask about this since I was once denied employment at the Times about two days before its version of the FiveThirtyEight site was to go live because I was “perceived” as being too partisan. In retrospect I think that was more about the Times wanting to secure the services of Nate Silver without small-fry baggage like me than about my alleged partisanship, though it was made clear the Times didn’t want to have to deal with complaints from conservatives about me. So I think the paper is selectively worried about its reputation for nonpartisanship. The latest brouhaha, however, may make it more cautious about burnishing that reputation by making itself Hillary Scandal Central.