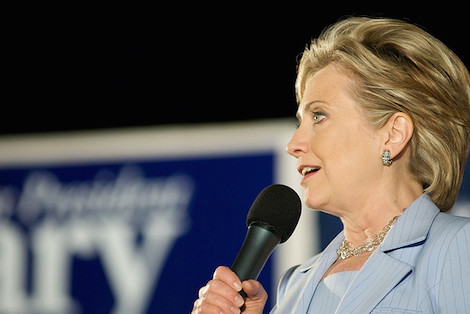 So as expected, Hillary Clinton laid out at least a partial agenda on climate change in Iowa yesterday, mainly focusing on renewable fuel goals that seem to be associated with Tom Steyer’s well-known criteria for supporting candidates (commitments to generate half of US electricity needs through renewables by 2030, and all of it by 2050), and continuing to delay taking a position on one or two hot buttons.

This puts her in pretty much the same territory as Martin O’Malley, and still separated from Bernie Sanders because of his support for a carbon tax–with one big exception, their opposition to, and her neutrality towards, the Keystone XL Pipeline, on which she says she does not want to preempt the Obama administration’s deliberations. If said administration denies authorization of the pipeline, it’s probably no longer an issue for her; if it approves it, then she will have to choose between splitting with most environmentalists or with Obama.

So there are future shoes to drop, but for now, HRC has more or less covered her environmental bases.