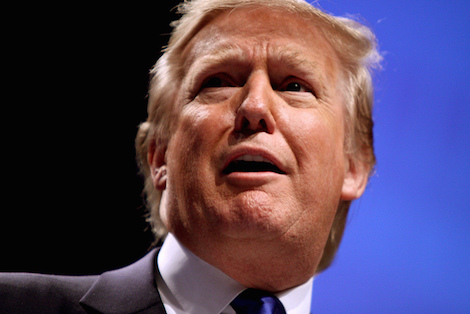 I’m having a tough day with a lot of distractions, and besides, I’ve barely written about Donald Trump today, so let’s get really lazy and talk about this report from CNN’s Eugene Scott:

If Donald Trump takes the White House, Sarah Palin might have an invitation to join his team.

The real estate mogul went on “The Palin Update” Monday — a radio show airing on Mama Grizzly Radio, a station that offers 24-hour news about Palin and issues related to her — telling host Kevin Scholla that he would consider having the former Alaska governor in an official capacity in a Trump administration.

“I’d love that,” said Trump, who didn’t specify what kind of a position he sees for her. “Because she really is somebody who knows what’s happening and she’s a special person. She’s really a special person and I think people know that.”

So let’s give The Donald a hand. What gig would be most appropriate for St. Joan of the Tundra, recognizing that you’d want to keep her from getting bored and quitting a few months in? You can answer in the comment thread.