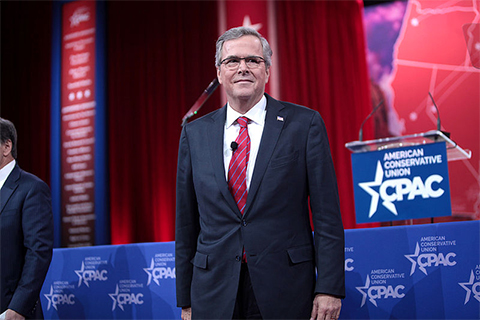 Remember that crazy Donald Trump instagram ad I wrote about before lunch? Jonathan Chait informs us Bush has responded, and his response tells us a lot more about the dynamics of today’s Republican Party than the initial offense:

There are a few ways Bush could respond to this. He could point out that Trump’s ad is viciously dishonest. Bush was correctly saying that breaking immigration law is not a felony. He was not denying that murder is a felony. Better still, Bush could point out the sick undertones of conflating anybody who crossed the border illegally in order to give their children a better life — a choice many Americans would make had we not enjoyed the good fortune to be born here — with murderers.

Instead Bush hits back at Trump by calling him … liberal:

“While Donald Trump was still supporting liberal, soft-on-crime politicians, Jeb Bush accumulated an eight-year record of cracking down on violent criminals as governor of Florida. Mr. Trump’s immigration plan is not conservative, would violate the constitution and cost hundreds of billions of dollars, which he will likely attempt to pay for through massive tax hikes,” said Bush spokeswoman Kristy Campbell in an email.

So the only response to this kind of crude, dishonest nativism is to get to your opponent’s right? Nice party you’ve got here, Republicans.

This is hardly a new thing, of course. Particularly when you are suspected of being a RINO squish, you never, ever criticize an opponent from the left if there is any alternative. Mitt Romney showed that in 2012 when he went after Rick Perry for being too softhearted on immigration; Newt Gingrich for being too bipartisan; and then Rick Santorum for being a taxer-and-spender.

If Jeb were running against Mussolini, Il Duce’s socialist past would be the focus, without question.