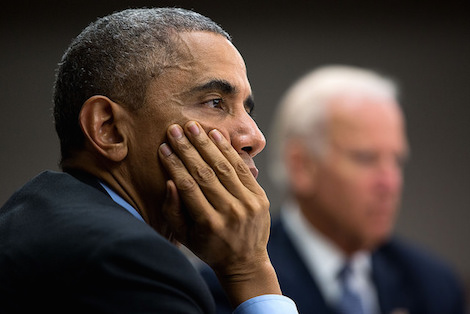 One of the few things we all thought we could count on when Congress returned from its August recess was a quick vote in the House on a resolution of disapproval for the Iran Nuclear Deal. After all, (1) it’s an issue on which all congressional Republicans seem to agree, (2) there’s a mandated timetable for dealing with the resolution that everybody agreed on months ago, and (3) it’s all kinda Kabuki Theater right now because Democrats have the votes to filibuster the resolution in the Senate.

But sometimes with these birds even the simplest things come unglued. Suddenly today a “revolt of House conservatives”–by no means the first or last–occurred, and now pending a meeting of House GOPers that’s currently underway, the Party of Responsible Government looks likely to produce some sort of three-headed monster of a legislative vehicle for its views on Iran, per Politico‘s Jake Sherman:

They are moving toward voting on a measure asserting Obama did not submit all elements of the agreement with Iran, a concept first raised by Reps. Mike Pompeo (R-Kan.) and Peter Roskam (R-Ill.), a former member of GOP leadership. Second, Republicans are working on a bill to try to prevent Obama from lifting sanctions against Iran. Third, the House would vote on a resolution to approve of the Iran pact. The original plan was to vote on a disapproval resolution.

This first gambit is based on the growing right-wing furor over “side agreements” between the Iranians and international nuclear monitors, plus alleged other “secret” deals, which conservatives claim cancels the procedural timetable for any votes and also makes the administration vulnerable to lawsuits. Boil it all down, and it’s an effort to add the Iran Nuclear Deal to the long list of things on which the Tyrant Obama supposedly broke the law and violated the Constitution.

In other words, House GOPers are talking to themselves, and to the almighty base.

The third gambit supposedly makes the treasonous nature of Democrats more obvious by requiring them to vote for the deal, not just against a resolution of disapproval.

Trouble with that one, and with the whole package, is that it’s not being coordinated with the Senate, where it’s totally not welcome (guess Ted Cruz is too busy in Kentucky trying to get into photos with Kim Davis to serve as the liaison between House and Senate wingnuts). So what should have been the easiest of maneuvers in a very crowded and complicated schedule has become a fiasco (Greg Sargent calls it “snatching defeat from the jaws of defeat.”), and congressional GOPers have become the people who could screw up a one-car funeral. Just amazing.