* Yes, Gov. Christie, some of us heard your dog whistles last night when you called President Obama a “petulant child.” Nuff said.

Among the innovations Donald Trump has brought to the Republican Party — along with an infusion of reality TV culture, a cult of personality and a refurbished authoritarianism — is a cruder brand of machismo than presidential-level politics has generally been willing to indulge.

* If you need a little humorous cathartic relief from all this focus on the Republican primary, check out this piece by Douglas McGrath titled: We Have a Serious Problem. You’ll get no summaries or quotes from me. Just go read the whole thing. It’s hilarious.

* If you missed Rachel Maddow’s interview with Hillary Clinton last night, I recommend that you take a few minutes to watch it. Much of the rhetoric between the Clinton and Sanders camps has gotten pretty overblown. Clinton does a good job of articulating her positions. She really should do this kind of thing more often.

* While most of the media is focused on the primary campaigns, the Obama administration just keeps on keepin’ on.

The Obama administration will announce on Friday a halt to new coal mining leases on public lands as it considers an overhaul of the program that could lead to increased costs for energy companies and a slowdown in extraction, according to an administration official…

The action is certain to further inflame a political debate over the federal government’s control of public lands, most recently illustrated by an armed takeover of a wildlife refuge in Oregon. About 40 percent of the nation’s coal is mined on public land, and most of that land is in the Powder River Basin of Wyoming.

* A couple of weeks ago I wrote about the power and limits of symbolism. Zeroing in on the “power” side of that equation, Charles Blow writes about The Other Obama Legacy.

Obama is the first black president — and may well be the last, who knows — and that alone has a historical weight and impact on this generation that will play out for generations to come.

He has not been a perfect president…

But he has simply, miraculously, won the position (twice!) and successfully negotiated the space — so well, in fact, that race is tangential to his record. He has opened yet another door of possibility, erased yet another myth of inadequacy, expanded yet another plane on which children can dream.

In the article, Blow mentioned that the White House has released some amazing pictures that chronicle this part of Obama’s legacy. Here is one of Pete Souza’s latest from the President’s trip to Baton Rouge, LA. 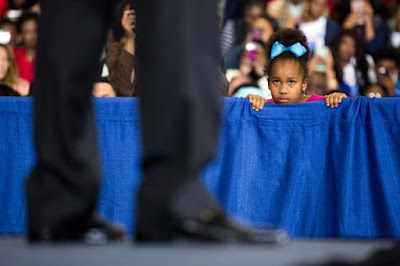