* On this Friday before the Iowa caucuses, here is the state of the race for Republicans: 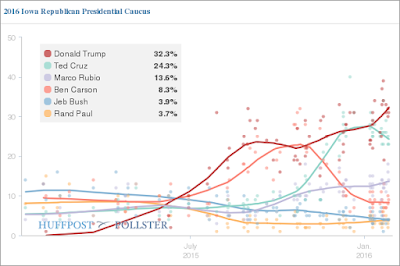 * DC villagers are calling it a cataclysm.

In what can be described only as a cataclysm in Beltway media, CEO Jim VandeHei is leaving Politico, the eight-year-old politics website that shook up Washington journalism…

And in what can be described only as a mega-cataclysm, Politico Chief White House correspondent Mike Allen is joining VandeHei in rushing toward the exits of Politico’s Rosslyn headquarters.

* According to this Marquette Law School poll, there might be some hope for Wisconsin:

In the race for U.S. Senate, Russ Feingold is supported by 50 percent of registered voters, with Republican incumbent Ron Johnson receiving 37 percent.

* It is hard to take anything else from this exchange other than that Jeb is beyond ready to throw in the towel.

CBS News’ Major Garrett asked the Florida Republican, “Can Jeb Bush be a surprise story here on caucus night?” The candidate, bemused, responded, “Yes, since the expectations are so low.”

Garrett, apparently unconcerned about twisting the knife, replied, “Well, you have succeeded there, governor.”

Bush, without missing a beat, raised his arms in triumph. Laughing a bit, he replied, “Mission accomplished.”

* Another day…another excellent executive action from the Obama administration.

On Friday, the Obama administration announced executive action that would require companies with 100 employees or more to report to the federal government how much they pay their employees broken down by race, gender, and ethnicity. The proposed regulation is being jointly published by the U.S. Equal Employment Opportunity Commission and the Department of Labor. It is hoped that this transparency will help to root out discrimination and reduce the gender pay gap—which, according to the White House, leaves women in full-time jobs earning 79 cents for every dollar a man earns. Further, a report from the Council of Economic Advisers found that the gender wage gap in the U.S. is 2.5 percentage points larger than the average among industrialized countries.

* Finally, on Wednesday, President Obama spoke at a special Holocaust ceremony at the Israeli Embassy in Washington D.C. Here is what the U.S. editor of Haaretz tweeted immediately after the speech.

A few of the President’s words that night were captured with this: 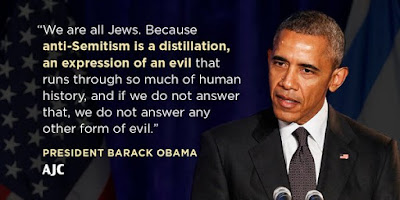