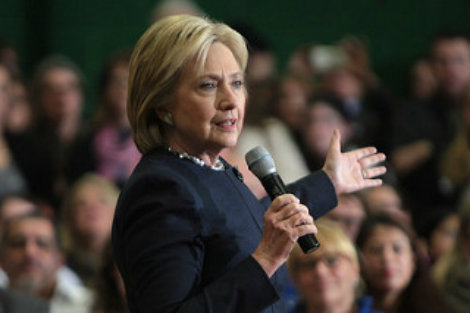 There is an interesting subtext to a discussion going on about the Democratic presidential contest right now. I think it would be helpful to dig into it a bit deeper to shine a light on the questions it raises.

Before we get to that, it’s important to lay out the context. As we have all seen by now, Hillary Clinton is beating Bernie Sanders primarily because she built a firewall with people of color.

Hillary Clinton took full command of the Democratic presidential race on Tuesday as she rolled to major victories over Bernie Sanders in Texas, Virginia and across the South and proved for the first time that she could build a national coalition of racially diverse voters that would be crucial in the November election.

Now that it is clear that the firewall is holding and the hopes of a Sanders victory are being challenged, many of the people who have been sympathetic to his campaign are popping up to warn Democrats that it is important to take Donald Trump’s candidacy seriously.

As I noted yesterday, when I initially heard this kind of warning, I dismissed it as odd given that the opposite has typically been the case. Too many times we’ve witnessed Democrats backing off of their message and agenda due to pearl-clutching in response to Republican attacks. The very recent history of how this played out in the 2014 midterms is a perfect example. Case in point: A Democratic candidate for the Senate in Kentucky who refused to answer a question about whether or not she voted for a Democratic president. Did Alison Lundergan Grimes go too far in taking the threat of Mitch McConnell’s antipathy for President Obama seriously? I think so.

But I dismissed these concerns too quickly, apparently. They’re not only popping up on twitter. Daniel Lippman dedicated an entire article to cataloguing them from a broad array of Democrats. Let’s take a look at what some of these people said so that we can understand the subtext of what is going on. First of all, here is the guy who was an advisor to Jim Webb prior to supporting Sanders – interesting combo, isn’t it?

“I think Trump could beat her like a tied-up billy goat,” said Mudcat Saunders, a rural Democratic strategist who’s supporting Bernie Sanders. “There are many areas in key swing states like Virginia, North Carolina, Ohio, and Pennsylvania that look like Sherman went through and didn’t burn anything. Empty factories, empty buildings, few opportunities for young people. It’s sad. It should be no surprise to anybody that voters in those areas are gravitating to Trump.”

There’s also this from another Democratic operative:

“Any place that has had manufacturing job declines, they’re very sensitive to immigration, they’re very sensitive to policies that they believe favor corporations and not them,” said Chicago Democratic operative Tom Bowen, a Rahm Emanuel political alum. “I do wonder if there’s some level of white voter that hasn’t come out in the past, a guy like Romney they thought was outsourcing their job, whereas a guy like Trump, they might actually believe that he’ll slap tariffs on Chinese imports and Mexican imports.”

“He’s speaking to a group of people for whom conservatism is not a set of principles and programs, but a collection of grievances, alienations and angers,” he said. “And he expresses that and they’re not going to leave him unless he does something really atrocious.”

But Shrum cautioned that he doesn’t think Trump can get the share of the white vote high enough to overcome what will be a solid minority vote against him.

Perhaps now the subtext of this concern becomes clear. What worries the people who have been sympathetic to the Sanders campaign is that, by building a firewall with voters of color, Clinton has abandoned the concerns of white working class voters.

I would suggest that this is only true to the extent that white working class voters are motivated by racism. That is because people of color make up a huge portion of working class voters. They share the concerns about their children’s economic future. But as I’ve pointed out before, they also understand the threat of the confederate insurgency we are witnessing from the right. The last thing they do is fail to take the fascism espoused by Donald Trump seriously. And neither does Hillary Clinton. That is why her message after the primary in South Carolina was one of inclusion rather than divisiveness.

…together, we can break down all the barriers holding our families and our country back; we can build ladders of opportunity and empowerment so every single American can have that chance to live up to his or her God-given potential. And then, and only then, can America live up to its full potential, too.

So I’d say…calm down everybody. There is no chance that the Clinton campaign will fail to take the candidacy of Donald Trump seriously. And there is no need to pit white working class people’s interests against those of people of color (except when white people define their interests as racist).

As Jon Favreau wrote recently, “Every election is a competition between two stories about America.” He described Trump’s story like this:

He is a celebrity strongman who will single-handedly save the country from an establishment that is too weak, stupid, corrupt, and politically correct to let us blame the real source of our problems—Muslims and Mexicans and Black Lives Matter protesters; the media, business, and political elites from both parties.

The last thing Democrats need to do is buy in to that story in any way, shape or form. Instead, we have to tell a totally different story.

…the story about a country that found the courage to turn away from our darkest impulses; that chose to embrace our growing diversity as a strength, not a weakness; that pushed the boundaries of opportunity outward and upward, until there are no more barriers, and no more ceilings.

Oh, and one final thought. The late great Molly Ivins would warn us that in the midst of it all, a sense of humor always helps. So there’s nothing wrong with occasionally pointing and laughing at the opposition when they make fools of themselves. That doesn’t make us un-serious. It keeps us sane.