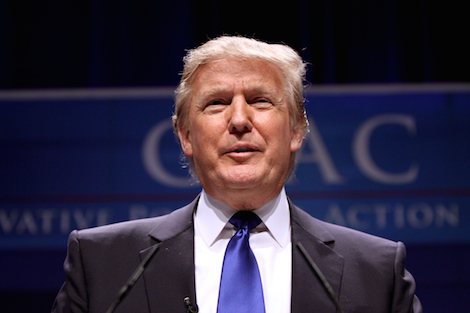 Josh Marshall identifies three main sources of Donald Trump’s appeal. The first is the angst a segment of the white population is feeling about demographic and cultural change. The second is the appeal of “dominance politics” to a significant subset of the Republican base. The third is that for this same subset of the Republican base, the violation of political norms (i.e., extreme political incorrectness) is extremely popular.

That’s all true, but Trump’s support is wider than this and for a simple reason.

Conditions for ordinary Americans have gotten more difficult and our government is squabbling about paying our bills on time and whether or not to keep the lights on in the Capitol building.

What makes Trump popular when he insults every major Republican politician, talking head, or news outlet is that the people are worse off and any candid assessment of the folks in Washington DC gives them zero hope for near-term improvement.

We can argue about which side is more culpable, and in my opinion it is not even a close call–the Republicans are the main culprit–, but Trump is popular on the right because their leaders are so unpopular. He’s getting support from the middle and even the left because (whomever is responsible) the result they’re seeing is gridlock and inaction and a deteriorating status quo.

As just a thought exercise, try figuring which parts of Trump’s message overlap with the message of Bernie Sanders. Whatever is left over is what is explaining Trump’s unique appeal to a subset of right-wingers.

For a while, the right thought they could break our government and get rewarded because their message is that government doesn’t work. Well, it didn’t work out that way for too long, because now they’ve got to contend with Trump.

That’s their problem, but it could be our problem soon if our nominee isn’t tuned into the zeitgeist of the country.

That may not be fair, but politics is rarely fair. A good politician gets ahead of the zeitgeist. A bad one gets run over by it.