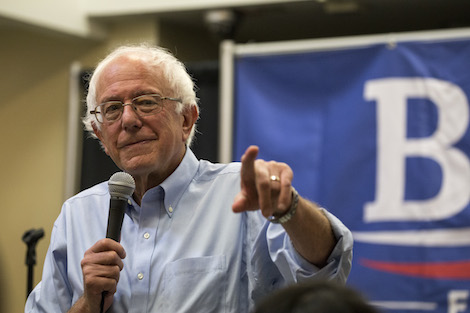 Bernie Sanders had a big thumping win in the Maine caucuses yesterday, following two big thumping wins in the prairie state caucuses of Kansas and Nebraska on Saturday. In doing this, he’s exposing a weakness that Clinton demonstrated in 2008, and that the best strategists in the game seem powerless to fix. She doesn’t do well among the most committed white Democrats–the kind of folks who turn out for caucuses in states like Iowa (where she managed a tie), Minnesota, and Colorado.

It is very fortunate for her that she’s managed to largely transfer the black vote from Barack Obama. Without her dominance with the black vote, she wouldn’t have rolled up such a big delegate lead in the South and she’d be in real trouble in the industrial Midwest.

I see Sanders get a lot of disrespect for his inability to do better with black voters, and if you want him to be the nominee I can certainly see why this is disappointing. But, sometimes you should stop for a moment and consider what he has been able to accomplish. I thought he might win in Iowa and I thought he would win in New Hampshire, but I didn’t see him going 8-10-1 in the first nineteen contests, and I doubt you did either.

If you are a believer in people-powered politics (or even if you aren’t), you simply have to marvel at Sanders’s ability to raise money without relying on corporate donations or super PACs. He’s raising so much money from ordinary citizens (five million individual donations at this point) that he can’t possibly figure out how to spend it all. And, unlike Clinton, he barely has to lift a finger to accomplish this:

Sanders outraised Clinton again in February for the second month in a row, bringing in $42.7 million to her $30 million. On the last day of the month alone, he brought in $6 million online as the campaign used social media to egg on his backers to give, give and give again.

Clinton, meanwhile, has recently taken two valuable days off the campaign trail to raise money in California for use against Sanders now. In a one-week stretch later this month, she is scheduled to make seven fundraising stops in six states — Georgia, Tennessee, Connecticut, Virginia, Washington and California.

Never mind that he’s hitting Clinton hard on her six-figure Wall Street speeches, the more lasting contribution is the proof of concept that a candidate can raise all the money they need to run a well-funded presidential campaign without going on bended knee to the richest people in this country. If every other consideration were equal, Bernie’s way of funding his campaign would be a decisive mark in his favor.

I think Conrad Black is the worst sort of scoundrel, and I don’t agree with his prediction that Donald Trump will win the presidency. But I do think he fairly concisely expresses why the country is fed up with the status quo:

Donald Trump polled extensively last year and confirmed his suspicion that between 30 and 40 per cent of American adults, cutting across all ethnic, geographic, and demographic lines, were angry, fearful and ashamed at the ineptitude of their federal government.

Americans, Trump rightly concluded, could not abide a continuation in office of those in both parties who had given them decades of shabby and incompetent government: stagnant family incomes, the worst recession in 80 years, stupid wars that cost scores of thousands of casualties and trillions of dollars and generated a humanitarian disaster, serial foreign policy humiliations, and particularly the absence of a border to prevent the entry of unlimited numbers of unskilled migrants, and trade deals that seemed only to import unemployment with often defective goods…

…International Communism and the Soviet Union disintegrated and America was alone, at the summit of the world.

And then it turned into a nation of idiots, incapable of doing anything except conduct military operations against primitive countries.

The Right Honourable Lord Black of Crossharbour shows his snobbish elitism in referring to “primitive countries,” and he might have added that we’ve proven incapable of doing very well even in this supposedly easy task. I don’t like how he presents his case, as it ignore’s Nancy’s admonition not to see both sides as equally at fault for the less than stellar results we’ve been getting from the federal government.

Having said all that, the heart of his point rings true and helps explain why both Trump and Sanders are getting so much more traction than anyone expected.

When kids conclude that college is an irrational investment–in many cases little more than an invitation to enter young adulthood in debt peonage–and cannot make enough money to make it sensible to own a car or move out of their parents’ home, then the system is broken and the authors of the system are accountable.

Bernie Sanders may not have all the tools a successful presidential candidate needs or the short-term politically realistic solutions that would force us to take him completely seriously, but he’s identified the problems and it’s resonating with young people.

He won’t get to the Promised Land, but he’s provided the outlines of a roadmap to get there. If the alternative is Donald Trump, that’s not a fork in the road we want to take.

So, we can nitpick Sanders as a candidate, mock him for his shortcomings, tell him how impractical he is. But we ought to appreciate what he’s trying to do and what he has already done.