* Markos Moulitsas says that Democrats should stop freaking out. 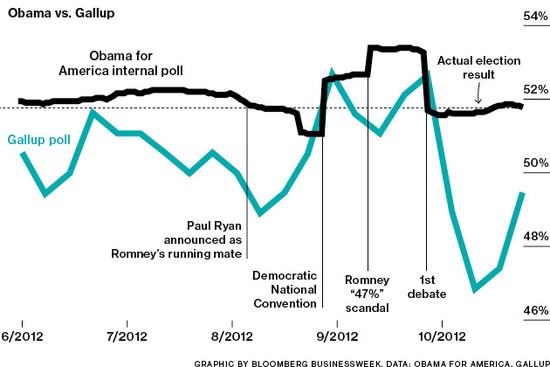 Ostensibly, the graph shows how much better Barack Obama’s polling was than Gallup, which isn’t too hard to prove given that Gallup had Mitt Romney winning in the end. But I’m actually interested in something else—how little that needle moved in Obama’s polling…

The only real question is turnout, which is the difference between big Democratic years (presidential years), and Republican ones (off years). We’re even going to get a controlled study on the value of a ground game, given that one campaign has one and the other doesn’t.

As early voting gets under way in this and subsequent weeks, the impression is common that only Hillary Clinton’s campaign has the infrastructure to begin mobilizing voters. The Trump campaign, mostly by default, has decided to outsource this and other forms of get-out-the-vote efforts to the state Republican parties…

As in so many aspects of this general election, Clinton’s biggest advantage may be strategic flexibility: She can easily shift resources from one battleground to another, whereas Trump cannot really expect Republicans in Nevada to send money for GOTV to Republicans in North Carolina, or vice versa. In fact, state Republican parties looking after their own candidates may target slightly different voters than those Trump needs for victory. Yes, the RNC and independent groups will offer some flexible resources, but probably not enough to offset what the Clinton campaign and its allies can muster.

* For a few days now I have been talking about Hillary Clinton’s pivot. Phillip Rucker noticed it too.

After a year and a half of running for president, the Democratic nominee has concluded that many Americans still do not have a clear understanding of what motivates her or what she would do as president. So in the campaign’s home stretch, Clinton is trying to reintroduce herself and her ideas to the country.

Personally, I think his goal is to reach zero percent support from people of color.

* Finally, one of the great things about presidential elections in this country is that they present an opportunity for celebrities to make fools of themselves for a good cause. Here’s this year’s edition.