* I am going to summarize the chaos that is erupting among Republicans as they try to hammer out a “repeal and delay” strategy on Obamacare. First up is Majority Leader Mitch McConnell.

Republican Senate leaders said Tuesday that they plan to charge through with their plans to repeal the Affordable Care Act as soon as the new Congress convenes in January.

“Obamacare repeal resolution will be the first item up in the new year,” Senate Majority Leader Mitch McConnell (R-KY) said at his weekly press conference after the GOP caucus lunch.

Republican leaders reiterated their previously floated plan of repealing the Affordable Care Act first and replacing it in a piecemeal fashion.

* Last week there was an attempt to rally the troops around a plan in which the repeal of Obamacare would happen immediately, but implementation of the repeal would be delayed for three years while Republicans came up with a replacement plan. Members of the House Freedom Caucus don’t like that idea.

The proposal “will meet with major resistance from Freedom Caucus members,” the North Carolina Republican vowed in an interview, calling it “the first big fight I see coming for the Freedom Caucus.”

“It should be repealed and replaced, and all of that should be done in the 115th Congress” — the two-year period starting in January through 2018 — and “not left to a future Congress to deal with,” Meadows added.

Most members of the Freedom Caucus represent the reddest of red districts. They don’t want to face their constituencies in the 2018 election without demonstrable proof that they got rid of Obamacare.

A key Republican senator in the GOP’s effort to repeal Obamacare signaled that he was on board for the party’s repeal-and-delay plan, but stressed that “the sooner we can come up with a replacement the better.”

“Our goal is to repeal Obamacare, have a transition period, and then replace it,” Sen. Lamar Alexander (R-TN), the chair of the Senate Heath, Labor, Education, and Pensions Committee, told reporters on Capitol Hill Tuesday. “And to do that in an orderly, sensible way that helps people and doesn’t hurt them.”

* Sen. Corker seems to be aligning himself with the Freedom Caucus.

Sen. Bob Corker (R-TN) seemed to be leaning toward a strategy to repeal and replace Obamacare simultaneously Tuesday, something that is being pushed by House conservatives in the Freedom Caucus.

“Why would we put off for three years doing what we know we have to do?” Corker told reporters on Capitol Hill Tuesday.

All of the above is about timing. It doesn’t even begin to tackle the question of what to include in either repeal or replace.

* Under normal circumstances, a party this divided over their first action in a Congressional session would be looking to their leader in the White House to coral the troops. But when he’s not busy tweeting about Boeing and Air Force One, this is what our president elect is up to.

While Donald Trump dines on frog legs with Mitt Romney and meets with a parade of lawmakers and governors in his gold-plated Midtown skyscraper, most of his transition staff are hunkered down in Washington, D.C., writing detailed governing plans for his first 100 days.

But so far, Trump and his inner circle have largely ignored those plans as they focus on top appointments and lean on the advice of politicians, CEOs and donors, rather than on their transition staff, say sources close to the transition.

The president-elect, meanwhile, has been more likely to set policy on Twitter than through consultation with his D.C. advisers.

* I’d like to ditto what Steve Benen had to say about that.

In other words, Trump and many of those he’s surrounded himself with have no idea what they’re doing, and about a month from now, they’ll be running the executive branch of a global superpower. These are the same folks, however, who’ve decided to “largely ignore” detailed governing plans.

* King James is joining the resistance.

The Cleveland Cavaliers are headed to New York City this week to play the Knicks and their taste in hotels is getting as much attention as their skills on the court. Some players, among them superstar LeBron James, are refusing to stay at the hotel their management booked for them: the Trump SoHo.

Cavaliers general manager David Griffin said on Monday that the team would find alternative accommodation for any players who don’t want to stay at a Trump property and that plans have been made for any “group that wants to be elsewhere to be together elsewhere.”

* Finally, perhaps I won’t have to explain why this short poem has been on my mind lately.

I want to write about faith,
about the way the moon rises
over cold snow, night after night,

faithful even as it fades from fullness,
slowly becoming that last curving and impossible
sliver of light before the final darkness.

But I have no faith myself
I refuse it even the smallest entry.

Let this then, my small poem,
like a new moon, slender and barely open,
be the first prayer that opens me to faith. 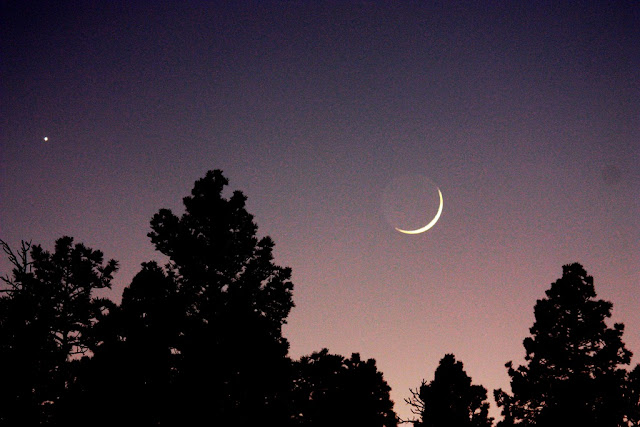