* There’s no denying that Trump demagogued the issue of trade during the election. But if you have any doubts about where all that is going, take a look at what Nick Timiraos noticed about his cabinet:

President-elect Donald Trump railed against the Trans-Pacific Partnership on his way to winning the White House and has vowed immediately to withdraw the U.S. from the 12-nation accord.

Several of his cabinet picks and other early nominees to top posts, however, have endorsed or spoken favorably about the trade pact, including Iowa Gov. Terry Branstad, announced Wednesday as Mr. Trump’s pick for ambassador to China, and retired Marine Gen. James Mattis, Mr. Trump’s pick to head the Department of Defense…

Gen. Mattis joined 16 other retired military leaders and former defense secretaries in a May 2015 letter to congressional leaders that said TPP would help the U.S. maintain a geopolitical advantage in Asia…

Another signatory to that letter: David Petraeus, the retired general who ran the Central Intelligence Agency and who has been considered by Mr. Trump for secretary of state. Former Massachusetts Gov. Mitt Romney and former Utah Gov. Jon Huntsman Jr., also considered candidates for the secretary of state post, have supported the TPP…

Wilbur Ross Jr., Mr. Trump’s nominee for Commerce secretary, has been extremely critical of the TPP in recent interviews, but he signed a letter in support of the agreement last year to the New York congressional delegation…

Vice President-elect Mike Pence also supported the TPP as Indiana governor, but he said he changed his mind on the trade accord, and other multilateral deals, after he discussed the issue with Mr. Trump this past July.

I have no illusions that TPP will survive. All the talk from Trump folks these days is about negotiating bilateral trade agreements. But just as the president-elect promised in a debate with Clinton, it is a sure bet that he’ll put his corporate friends in charge of those negotiations. And I’d be willing to bet a lot of money that they turn out to be worse than TPP when it comes to their impact on American workers.

* Speaking of the Trump Cabinet, here’s a graph that speaks volumes:

McMahon is billionaire #3 for Trump cabinet, which now has net worth of at least $9.3B—not incl. Trump’s billions https://t.co/zv4Hn5rweW pic.twitter.com/sYoKnA72SK

* Here is another group that is speaking up about the effects of an Obamacare repeal:

Donald Trump may cast Obamacare as a job killer. But some entrepreneurs say they couldn’t have started their businesses without it.

Obamacare has freed them from depending on employers for health insurance. Instead, they told CNNMoney they can pursue their own American Dreams and work for themselves while getting coverage through the exchanges.

The President-elect’s promise to repeal Obamacare next year has left these small business owners fearful that they will have to dismantle everything they’ve worked for and return to the corporate sector just to remain insured.

* There isn’t a good summary quote from this article by Kevin Baker, so I’ll simply share the title and tag line, “The Myth of the Smug Liberal: In the dawn of the Trump era, there is no stereotype more lazily deployed than the condescending coastal liberal who lives in his own bubble.” Go check it out.

* A lot of people are beginning to take a look at Van Jones as a potential liberal spokesperson. He’s been getting quite a bit of press attention lately. I’ve been following Jones since he ran the Ella Baker Center in Oakland, California and disagree with some of the things he’s been saying lately. But this is right on!

The game is different. I think in the digital economy, the limiting factor is not money—the limiting factor is time and attention. You can be a billionaire and still be short on time. Celebrity is a hack for a time. Celebrity is a hack for attention. If you already hacked the mindshare of America, you have a mass advantage over somebody who says, “I can raise a bunch of money for ads.” Well, I ain’t watching your ads. I’m zapping through your ads. People have thought that the key to winning office was the ability to raise money. I think the key to winning office is the ability to get attention. Celebrities know how to do that. That’s why they’re celebrities.

* Finally, I’m going to give you a taste of this one in the hopes that you’ll follow the link and read the whole thing.

How the Trump Stole America

In a land where the states are united, they claim,
in a sky-scraping tower adorned with his name,
lived a terrible, horrible, devious chump,
the bright orange miscreant known as the Trump.

This Trump he was mean, such a mean little man,
with the tiniest heart and two tinier hands,
and a thin set of lips etched in permanent curl,
and a sneer and a scowl and contempt for the world.

He looked down from his perch and he grinned ear to ear,
and he thought, “I could steal the election this year!
It’d be rather simple, it’s so easily won,
I’ll just make them believe that their best days are done!
Yes, I’ll make them believe that it’s all gone to Hell,
and I’ll be Jerk Messiah and their souls they will sell… 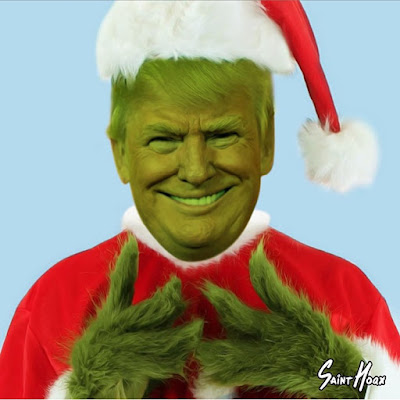