Ambassador John Bolton claimed Sunday that hacks during the election season could have been “a false flag” operation — possibly committed by the Obama administration itself.

That idea was evidently repeated by Carter Page, a former Trump advisor with deep ties to Russia.

U.S. government might have deliberately orchestrated cyberattacks to make it look as though they were coming from Russia, Carter Page says.

* Steve Benen documents a year in the life of Donald Trump and Vladimir Putin.

As evidence mounts that Russian President Vladimir Putin’s government intervened in the American presidential election, allegedly taking deliberate steps to help elect Donald Trump, it’s easy to forget that this story has unfolded slowly, piece by piece, over the course of about a year.

* Michael Isikoff reports that attempted Russian-backed hacks of Clinton and the DNC continued throughout the campaign.

In the closing days of the 2016 election campaign, hackers believed to be working for Russian intelligence launched a new wave of attacks on Hillary Clinton’s campaign and the Democratic National Committee — a previously unreported cyberoffensive that heightened concerns, now endorsed by the CIA, that the Russian government was seeking to influence the outcome of the election in favor of Donald Trump, according to sources familiar with the investigations into the attempted intrusions.

The attacks came in the form of so-called “phishing” emails sent to nearly a dozen campaign and committee staffers in a renewed effort at penetrating their networks, said Dmitri Alperovitch, the co-founder and chief technology officer of CrowdStrike, the cybersecurity firm hired by the DNC to repel attacks on its network. Staffers at that point were alert enough to reject entreaties to click on the unsolicited email messages that would have allowed the hackers into their computers, he said.

But at least one top Clinton campaign staffer, communications director Jennifer Palmieri, told Yahoo News on Sunday that she received an alert from Google in mid-October informing her that her personal Gmail account had been targeted by a “foreign state” actor and that her password needed to be changed.

“They were targeting us throughout the election,” said another former senior Clinton campaign staffer, who asked not to be identified. “They never stopped trying to get back in.”

* Majority Leader McConnell has agreed to a Congressional investigation.

Senate Majority Leader Mitch McConnell (R-Ky.) backed calls for a congressional probe into Russian interference in the U.S. election, saying the Senate Intelligence Committee is “more than capable” of investigating the matter…

McConnell dismissed calls for a select committee, saying that the Senate will follow the “regular order.” He stressed that foreign interference in U.S. elections “simply cannot be a partisan issue.”…

McConnell also noted that Senate Armed Services Committee John McCain (R-Ariz.) will direct a cybersecurity review from one of his subcommittees.

A new study finds that 52 million non-elderly Americans have the sort of pre-existing conditions insurers cited to deny them health insurance coverage in the pre-Affordable Care Act world. The study, released Monday by the Kaiser Family Foundation, notes that a majority of those Americans are covered by group health plans where they would not face such medical underwriting. But it adds that, due to market churn, many more than just the 8 percent or so of consumers who currently receive coverage through the individual marketplace stand to be affected if the pre-existing conditions provision of Obamacare is dismantled.

“For many people, the need for individual market coverage is intermittent, for example, following a 26th birthday, job loss, or divorce that ends eligibility for group plan coverage, until they again become eligible for group or public coverage,” the study said.

* Finally, a little Mark Twain wisdom to go along with my theme today. 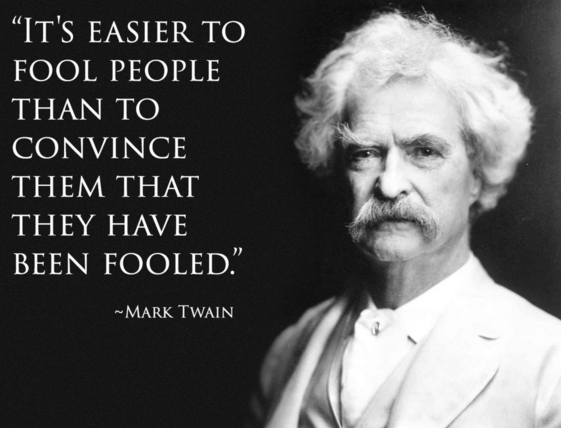