* Mark Leibovich brings us Sen. Al Franken’s thoughts about the next four years. It all begins with a fascinating observation from the former comedian.

This was the senator’s first observation to me on a recent afternoon. It was exactly three weeks from the day the punch line became the president-elect. And Trump’s mysterious absence of laughter had never occurred to me before, even though I’d spoken to him a fair amount and he has lived pretty much nonstop in our faces for 18 months, no end in sight.

Franken, the second-term Democratic senator from Minnesota and, before that, a longtime writer and performer on “Saturday Night Live,” has studied this. He provided commentary for MSNBC at the Al Smith Dinner, the Catholic charity fund-raiser in October where presidential nominees engage in good-natured ribbing of themselves and each other (Trump mostly skipped the “good-natured” part and was booed). “I wanted to see if Trump laughed,” Franken said. “And he didn’t. He smiled, but didn’t laugh. I don’t know what it is.”

* The picture headlining the article above speaks volumes. 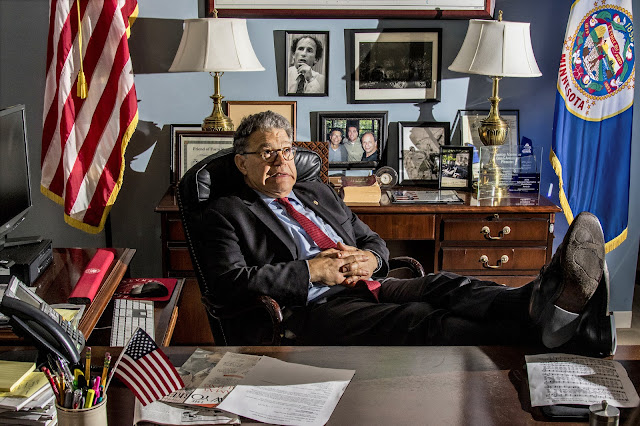 The look on Franken’s face expresses how an awful lot of us feel these days about the prospect of a Trump presidency. It’s also interesting to notice the pictures of Paul Wellstone on the wall behind the Senator’s desk. Those are there as a constant reminder of the legacy Franken tries to uphold in his current position. Finally…the Senator is obviously in need of a new pair of shoes.

* Today Obama held the last bill-signing ceremony of his presidency. It happened as the result of the passage of the 21st Century Cures Act. 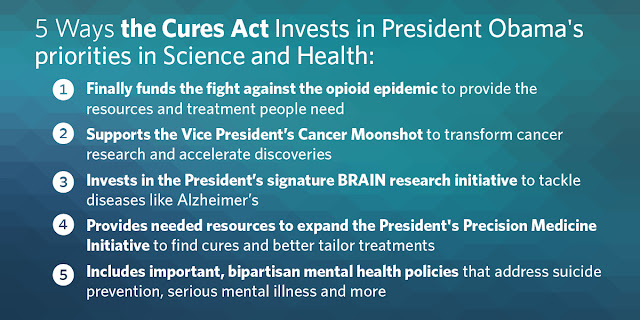 Obviously there were several reasons why this one got a little emotional for the President.

The postelection period has seen an enormous amount of pushback against so-called identity politics — specifically the campaigns for social justice and representation for women and people of color — as a frustrating distraction from the serious economic concerns that affect a broad swath of Americans. If only we could get away from divisive “social issues,” goes this line of thinking, Democrats could win elections and be able to enact progressive economic policies that would help far more people. But the idea that fights over reproductive freedom, sexual assault and harassment, LGBTQ rights, voting rights, criminal-justice reform, and gender and racial bias can be somehow separated from larger progressive economic stances is a fiction. As most people engaged in this argument know perfectly well, economic inequality is deeply wrapped up with gender and racial bias. The impending rollback of social progress in a Trump administration will have a staggering economic impact on this country’s women, especially women of color, and regressive economic policies will take a disproportionate toll on those same populations.

* Earlier this week I noted that the Trump transition team had submitted a questionnaire to the Department of Energy that included a request for the names of staff and contractors who had been involved in Obama’s climate change efforts. Here’s how DOE responded:

“The Department of Energy received significant feedback from our workforce throughout the department, including the National Labs, following the release of the transition team’s questions. Some of the questions asked left many in our workforce unsettled,” said Eben Burnham-Snyder, a department spokesman. “Our career workforce, including our contractors and employees at our labs, comprise the backbone of DOE (Department of Energy) and the important work our department does to benefit the American people. We are going to respect the professional and scientific integrity and independence of our employees at our labs and across our department.

* Finally, as I wrote previously, the federal employees at DOE are not the only ones who are concerned about what a Trump presidency means for their jobs. So perhaps a video thanking these public servants for their work over the last eight years was merely one of Obama’s many goodbyes as he leaves the White House. Or perhaps he’s heard about their concerns and wanted to affirm their value while encouraging them to hang in there.