* It is extraordinary that an outgoing Secretary of the Interior feels the need to speak these words in 2016. But then, we are living in extraordinary times.

Scientists must confront climate change deniers and speak up if U.S. President-elect Donald Trump tries to sideline climate research, Interior Secretary Sally Jewell is due to say on Wednesday.

“If you see science being ignored or compromised, speak up,” Jewell will tell a meeting of earth and space scientists in San Francisco, according to a draft of the speech seen by Reuters…

“Think about where to raise your voice and then do it,” Jewell will tell a meeting of the American Geophysical Union (AGU) – a global association of researchers. “The American people must be able to trust science.”

* It sure sounds like Trump issued a warning to Speaker Ryan last night.

“Speaker Paul Ryan! I’ve really come to …,” Trump said, before the crowd cut him off with a mix of cheers and boos. “Oh, no! I’ve come to appreciate him. … He has been terrific, and you know, honestly, he’s like a fine wine: Every day goes by, I get to appreciate his genius more and more.”

But then he added a warning, smiling while he said it: “Now, if he ever goes against me, I’m not going to say that, OK?”

* The Kaiser Family Foundation provides a lot more detail than I did about how repealing Obamacare will affect Medicare.

This brief explores the implications for Medicare and beneficiaries of repealing Medicare provisions in the ACA. The Congressional Budget Office (CBO) has estimated that full repeal of the ACA would increase Medicare spending by $802 billion from 2016 to 2025.1 Full repeal would increase spending primarily by restoring higher payments to health care providers and Medicare Advantage plans. The increase in Medicare spending would likely lead to higher Medicare premiums, deductibles, and cost sharing for beneficiaries, and accelerate the insolvency of the Medicare Part A trust fund. Policymakers will confront decisions about the Medicare provisions in the ACA in their efforts to repeal and replace the law.

* Nancy Pelosi doubts that the GOP can pull off ObamaCare repeal.

“There’s division among the Republicans within their own ranks as to timing and substance,” Pelosi told a group of reporters gathered in her office in the Capitol.

The reason, Pelosi said, is not political but economic. The Republicans want to repeal the ObamaCare provision requiring almost everyone to obtain health insurance — the individual mandate — but many are also vowing to keep some of the law’s central benefits, like the stipulation that insurers cannot refuse coverage based on preexisting conditions.

Pelosi said that strategy simply won’t work, because eliminating the mandate while keeping the benefits would shift the balance of insurance pools toward sicker people, causing premium costs to skyrocket.

“You can’t keep them. You can’t afford them, because the costs would be so astronomical,” she said…

“The one thing … that I think the Republicans are more interested in — not the 20 million or whatever — are costs,” she said. “What are the costs going to be to their constituents?”

Mindful of the clock ticking down to a Trump presidency, the Obama administration issued a final rule on Wednesday to bar states from withholding federal family-planning funds from Planned Parenthood affiliates and other health clinics that provide abortions. The measure takes effect two days before the Jan. 20 inauguration of Donald J. Trump…

According to the department, repealing the rule would require a new rule-making process, or a joint resolution of disapproval by the House and Senate, with concurrence by the new president.

* I agree 100% with Kevin Drum when it comes to the presidential election.

Everyone wants to draw big, world-historical lessons from this election. That’s understandable, since the result was the election of an unprecedentedly dangerous and unqualified candidate. But the data just doesn’t support any big lessons…

Nevertheless, the identity politics critics insist that the lesson for Democrats is to ditch identity politics. The economic lefties say the lesson is that Democrats need to be more populist. The Bernie supporters are sure that Bernie could have won. The DNC haters think it was a massive FUBAR from the Democratic establishment. The moderates blame extremism on social issues for alienating the rural working class.

These have one element in common: All these people thought all these things before the election. Now they’re trying to use the election to prove that they were right all along, dammit. But they weren’t. This election turned on a few tiny electoral shifts and some wildly improbable outside events. There simply aren’t any truly big lessons to be drawn from it.

* Finally, nothing I’ve seen does a better job of capturing how so many of us felt after the horrific shooting at Sandy Hook Elementary School four years ago today than this image. May all the little ones rest in peace as we mourn their loss. 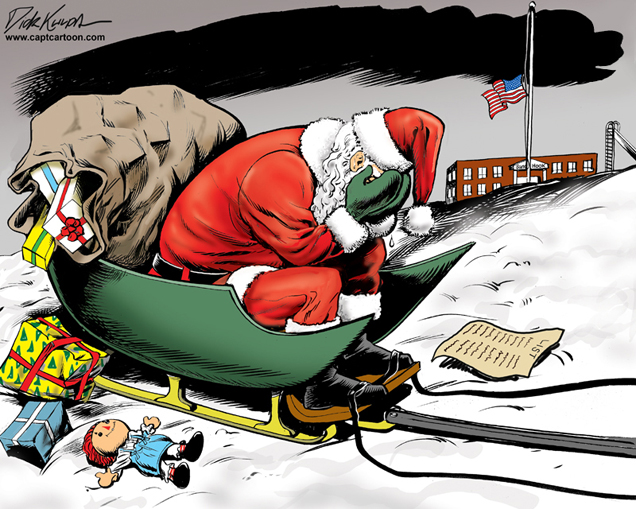