* Several times over the last couple of weeks I’ve thought about how Republicans used to say that Obama’s foreign policy alienated our allies. Of course it was a lie. And now the same people who made that critique are completely ignoring things like this:

Donald Trump will not be welcome to address Parliament on his state visit to the UK because of its opposition to racism and to sexism, the Speaker of the House of Commons has said in a major snub to the American President.

In a dramatic intervention, John Bercow, the Speaker, said he was “strongly opposed” to Mr Trump speaking in the Commons as he stressed that being invited to address Parliament was “not an automatic right” but “an earned honor”.

“Before the imposition of the migrant ban I would myself have been strongly opposed to an address by President Trump in Westminster Hall,” Mr Bercow told MPs.

Germany must stand up in opposition to the 45th president of the United States and his government. That’s difficult enough already for two reasons: Because it is from the Americans that we obtained our liberal democracy in the first place; and because it is unclear how the brute and choleric man on the other side will react to diplomatic pressure. The fact that opposition to the American government can only succeed when mounted together with Asian and African partners — and no doubt with our partners in Europe, with the EU — doesn’t make the situation any easier.

…It is thus somewhat ironical that it is Germany, the country that is politically and economically dominant in Europe, that will now have to fill in many of the gaps created by America’s withdrawal from the old world order…At the same time, Germany must build an alliance against Donald Trump, because it otherwise won’t take shape. It is, however, absolutely necessary.

The Department of Defense is seeking to rent space in President Trump’s New York skyscraper, Trump Tower, a move that could directly funnel government money into the president’s business interests.

The U.S. military agency is “working through appropriate channels . . . to acquire a limited amount of leased space in Trump Tower,” Lt. Col. J.B. Brindle, a Pentagon spokesman, told The Washington Post in a statement late Tuesday.

* The Pope didn’t mention his name, but everyone knows who he was talking about.

Pope Francis repeated his appeal for people to build bridges of understanding, not walls as he marked a feast day of a Sudanese immigrant amid a global uproar over the Trump administration’s attempts to impose a travel ban on seven mostly Muslim countries.

The pope didn’t refer to President Donald Trump in his comments. But at the end of his audience, he noted that Wednesday marked both the church’s day of reflection for young victims of human trafficking and coincidentally the feast day of St. Josephine Bakhita.

She was a 19th-century Sudanese slave who, after migrating to Europe, became a nun. Sudan is one of the seven countries on the U.S. travel ban list.

“In the social and civil context as well, I appeal not to create walls but to build bridges,” he said. “To not respond to evil with evil. To defeat evil with good, the offense with forgiveness. A Christian would never say ‘you will pay for that.’ Never.

“That is not a Christian gesture. An offense you overcome with forgiveness. To live in peace with everyone.”

* During the 2016 campaign, I gave up trying to write about Donald Trump’s policy proposals because they changed with the winds. Now as president, that lack of clarity continues on things like whether or not he supports Medicare negotiating for lower drug prices. When I read this from Steve Benen today, it sounded very familiar.

What does this mean? I have no idea.

And therein lies the problem. For many of us interested in the White House’s policies, there’s an inclination to consider what the president and his aides say about the administration’s positions. But with Team Trump, that doesn’t work – in part because of their discomfort with the truth, and in part because they don’t seem to have much of a grasp on public policy.

Sean Spicer just now: I can only hope that if Coretta Scott King was still with us, that she would support Senator Sessions's nomination.

Jeeze, wouldn’t it be nice if Ms. King had told us what she thinks about Jeff Sessions? Oh wait…she did! 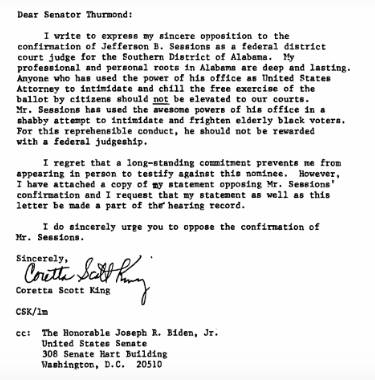 * Finally, Majority Leader McConnell tried to explain why he silenced Sen. Warren last night by saying, “She was warned. She was given an explanation. Nevertheless, she persisted.” He unwittingly gave the resistance a rallying cry.