* Steve Benen writes about Trump’s comments today on his reaction to Assad’s use of chemical weapons.

The president wants everyone to now know that his “attitude toward Syria and Assad has changed very much.” OK, but what was his attitude before based on? Why did it take this week’s violence and bloodshed to change Trump’s mind about something he should’ve known before?

If it seems like this keeps happening with Trump, it’s not your imagination. Trump thought overhauling the nation’s health care system would be easy, right up until he discovered that it’s “complicated.” He “didn’t realize” the nuances of how Congress works. He thought private-sector deal-making was effectively the same as reaching governmental agreements, and was surprised to discover otherwise.

He apparently didn’t realize that Assad is responsible for a series of deadly atrocities, which is why we’re only now seeing the president’s attitude toward Assad “change very much.”

* Career professionals in DOJ’s Civil Rights Division are likely reeling at the thought that AG Sessions plans to “review” (more likely decimate) much of the work they’ve done in cities like Ferguson, Baltimore and Chicago on police reform. Former acting head of the division Vanita Gupta and senior counsel Corey Stoughton articulated what many of them are not able to say publicly.

If Mr. Sessions’s review is conducted in good faith, it will vindicate the Justice Department’s existing police work and demonstrate the continuing value of consent decrees. It will show that the department’s civil rights division uses its authority wisely, in only a small fraction of the nation’s more than 16,000 law enforcement agencies. It engages fairly with law enforcement, as well as individuals, community leaders and elected representatives. It makes findings where the law and the facts demand it. It negotiates agreements in good faith with local leaders, adhering to principles of local control and resource limitations without compromising its statutory responsibility to enforce federal civil rights laws. It closes cases when needed.

Justice Department career staff members understand the difficulties faced by police officers in Baltimore and across the country. They know that every day, officers risk their lives to uphold the law and keep communities safe. They are keenly aware of the challenges of policing in cities grappling with complex social and economic challenges rooted in poverty, racial segregation and inadequate educational, employment and housing opportunities. The factors the attorney general wants the Justice Department to consider in his review have already been accounted for. Mr. Sessions should let the people in his department working on police reform keep doing their jobs.

* Sarah Posner does a great job of analyzing the various reasons given by the White House as to why Steve Bannon was removed from the National Security Council (hint: they’re all nonsense). But this one from Bannon himself takes the cake.

* You can tell how freaked out Republicans are about Jon Ossoff’s chances of winning the special election to fill Tom Price’s House seat in Georgia by the level of fear-mongering they threw into their latest ad. Seriously…a picture of Osama bin Laden?

* Stepping back from a singular focus on Donald Trump, Alex Pareene writes about how “The Long, Lucrative Right-wing Grift Is Blowing Up in the World’s Face.”

If you want to understand intra-GOP warfare, the decision-making process of our president, the implosion of the Republican healthcare plan, and the rest of the politics of the Trump era, you don’t need to know about Russian espionage tactics, the state of the white working class, or even the beliefs of the “alt-right.” You pretty much just need to be in semi-regular contact with a white, reasonably comfortable, male retiree. We are now ruled by men who think and act very much like that ordinary man you might know, and if you want to know why they believe so many strange and terrible things, you can basically blame the fact that a large and lucrative industry is dedicated to lying to them.

Because there was a lot of money in it for various hucksters and moguls and authors and politicians, the conservative movement spent decades building up an entire sector of the economy dedicated to scaring and lying to older white men. For millions of members of that demographic, this parallel media dedicated to lying to them has totally supplanted the “mainstream” media. Now they, and we, are at the mercy of the results of that project. The inmates are running the asylum, if there is a kind of asylum that takes in many mostly sane people and then gradually, over many years, drives one subset of its inmates insane, and also this asylum has the largest military in the world.

* Nate Cohn writes, “Democrats Are Bad at Midterm Turnout. That Seems Ready to Change.” I’ll let you read what he has to say for yourself. But I get really tired of the meme that, when it comes to midterms, we should limit the construction of our narrative to the last two in 2010 and 2014. The truth is that turnout is abysmal overall for midterm elections. But when Democrats got mad about George W. Bush in 2006 – turnout improved significantly. 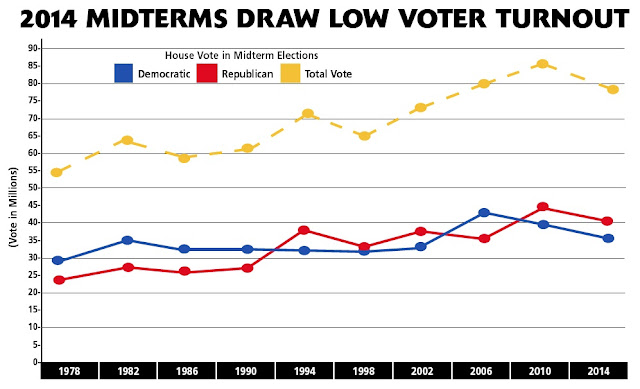 * Finally, I’m not necessarily going to recommend that you read about the latest New York Times interview with Donald Trump. But if you do, be sure to follow up by watching Louis C.K. on the Late Show. It will be just the antidote you need (warning: this video might not be appropriate for work environments).

P.S. I’ll simply add two comments: (1) the comparison between the NYT interview and Louis is a perfect example of what Carlos Maza said about the fact that comedians have figured out how to talk about Trump, and (2) I love how Louis talked about why we vote – so be sure to watch to the end for that.

Its “servitude" clause allows prisoners to be put to work and underpaid—i.e. unpaid. How Senator Jeff Merkley and a band of activists are fighting back.

Computer screw-ups, cybercrime, and other problems are keeping people from getting their checks. It needs a national solution and presidential action.

Janine Brookner took on the KGB, sexist rivals, and Justice Department lawyers alike during a pioneering career as a spy and lawyer.