* One of the things that allows Donald Trump to spread his hatred and division is that we spend a lot of time on stories about how an alleged Diversity Visa immigrant killed eight people by running them down with a truck. We don’t hear as much about stories like this:

An Egyptian Muslim just-arrived in the United States on a Diversity Visa—precisely the type that Donald Trump is trying to blame for the bike-path murders on Halloween in Lower Manhattan—in fact stopped a terrorist atrocity that would have been much, much worse in 1997 on the New York City subway.

Christopher Dickey tells the whole story. I encourage you to go read it and share it with everyone you know.

* The Washington Post documents how “Blue states will be hit hardest by GOP tax plan’s limits on deductions.”

The graphs tell the story. 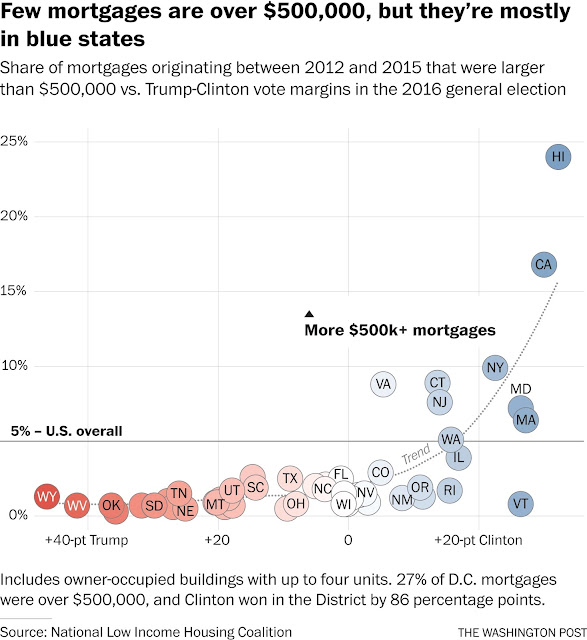 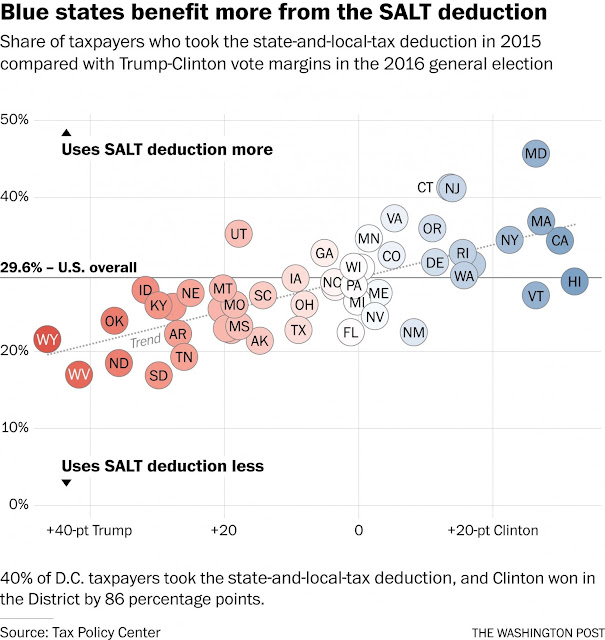 * Another one bites the dust in Texas.

U.S. Rep. Lamar Smith, R-San Antonio, is retiring from Congress, two sources close to the congressman told The Texas Tribune on Thursday. Smith confirmed the decision in a conference call later in the day.

Smith represents the 21st Congressional District, which has been gerrymandered to be R+10 according to the Cook Report.

President Donald Trump ended months of reality show-style speculation by picking Federal Reserve Governor Jerome “Jay” Powell to lead the central bank, settling on a seasoned veteran for one of the world’s most important economic jobs and signaling there won’t be drastic changes at the Fed…

Powell would replace Janet Yellen, an appointee of President Barack Obama and the first woman to head the central bank. In deciding to move on from Yellen, who presided over record stock market advances and gained trust on Wall Street, Trump broke from historic precedent in which new presidents typically renominate Fed chairs they inherited.

* Trump and his cabinet have said and done some ridiculously ignorant things. But this one from Rick Perry goes to the top of my list as of today.

Energy Secretary Rick Perry suggested on Thursday that increasing fossil fuel use to spread electricity across Africa would help prevent sexual assaults there.

Perry, who traveled to South Africa last week to tout the Energy Department’s partnerships there, said he spoke with a young girl who wanted electricity so she could read without relying on the light of a fire “and have those fumes literally killing people. But also from the standpoint of sexual assault.”

“When the lights are on, when you have light that shines — the righteousness, if you will — on those types of acts,” he told an Axios event.

* The Special Counsel has it’s own page at the DOJ web site. I just thought I’d pass that along because it might be something to keep an eye on.

* Finally, I didn’t get the chance to share these on “Mueller Indictment Day,” but I thought you might enjoy them anyway.