* One thing you can count on is that, in his SOTU speech tonight, Trump will brag about all of the jobs he’s created. The folks at ProPublica have provided a fun graphic to debunk those claims. Here’s the intro:

President Trump has made many claims promising that individual companies such as Amazon, Alibaba and Boeing will hire large – and specific – numbers of American workers, a total of 2.4 million in all.

We found that only about 206,000 of those jobs have been created so far.

But there’s no sign any Americans were actually hired. The Chinese e-commerce giant wasn’t planning to build facilities or hire coders in the U.S; it’s trying to recruit American merchants to use its platform with the expectation that those companies would then hire more people.

* The president will find it difficult to brag about stock market gains tonight.

U.S. stocks closed sharply lower on Tuesday, falling for a second day as the first major sell-off of the new year intensified.

The Dow Jones industrial average dropped 362.59 points to finish at 26,076.89, with UnitedHealth as the biggest decliner. The 30-stock index also posted its biggest percentage decline since May.

* Sam Thielman explains why the long knives have come out against Deputy Attorney General Rod Rosenstein.

Many legal scholars believe a sitting president can’t be criminally indicted, meaning that if Mueller finds evidence of crimes by Trump, his strongest recourse might well be to make a referral to Congress for potential impeachment proceedings. But some of those experts tell TPM that under the regulation governing the special counsel’s office, Mueller lacks the authority to make that referral without approval from Justice Department officials overseeing his investigation…

“Those regulations don’t explicitly give the special counsel authority to make a referral,” William Yeomans, a 26-year DOJ veteran who has served as an acting assistant attorney general and is now a fellow at the Alliance for Justice, told TPM. “If there is a referral, it’s going to have to go through Rosenstein. Ultimately, it’s probably his decision.”

* EPA Administrator Scott Pruitt got caught in a big “oops, but true” moment.

Environmental Protection Agency Administrator Scott Pruitt said in a 2016 interview that “Donald Trump in the White House would be more abusive to the Constitution than Barack Obama,” according to an audio recording released Tuesday by an advocacy group, prompting questions as he faced the Senate Environment and Public Works Committee for the first time since taking office.

The radio interview with”The Pat Campbell Show” in Tulsa took place on Feb. 4, 2016, at a time when Pruitt — then Oklahoma’s attorney general — was serving as a policy adviser to GOP presidential candidate Jeb Bush. Asked whether he supported Trump as a presidential candidate, Pruitt replied, “No.” 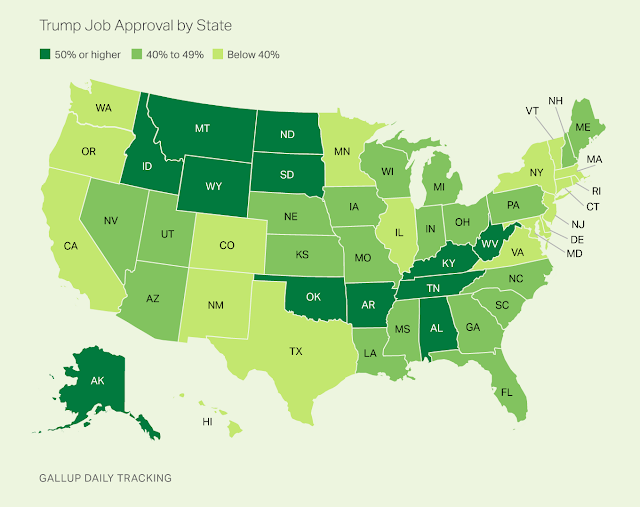 I wonder if you can guess what jumped out at me. If it was the fact that Trump’s approval rating is under 40% in Texas—bingo! Ed Kilgore has a few more details.

…he was under 50 percent for the last year in job approval in 38 of the 50 states, including 18 he carried in 2016. Trump was actually under 40 percent in Texas, and no better than 43 percent in Iowa, Pennsylvania, Wisconsin, Georgia, Florida, Arizona, Michigan, and North Carolina.

* The other day I wrote about the fact that, for the party that is in the minority in Congress, it is easier to stop bad legislation than it is to proactively get something passed. Last night there was cause to celebrate when it comes to stopping bad legislation.

The Senate on Monday blocked a bill, backed by President Donald Trump, to ban abortion after 20 weeks of pregnancy…

The Senate voted 51-46 against advancing the bill. Democrats Joe Manchin, Joe Donnelly and Bob Casey broke with others in their party to vote to advance the bill. Republicans Susan Collins and Lisa Murkowski joined with the remaining Democrats present to block the measure.

Just to be clear, this was a bad bill because it codified into law a decision that is better left to a woman in consultation with her family and doctor.

* Finally, what a boss! It’s not just that she is so good, it’s that she’s having so much damn fun.