There’s no doubt something to be said for being the smartest person in the room. In politics, though, power and success often flow to the less brilliant who accept their own limitations and take full advantage of the gaudier intellects around them.

That is, in many ways, the story of Richard M. Daley. Eldest son of the legendary Chicago mayor and political boss, Daley entered politics at an early age surrounded by doubters who considered him an inarticulate, unsophisticated mediocrity, incapable of maintaining the family legacy. The disparaging comments continued through his first two decades in Illinois public office and did not disappear even during the early stages of his mayoralty, which began in 1989. “There are smarter people than me,” Daley once told a reporter. “I know that. I’ve met a lot of them. I don’t say too much. I just listen and try to figure out where they’re coming from.” 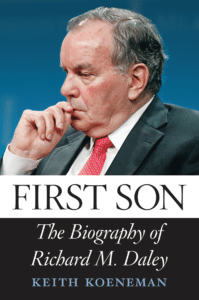 But when he retired in 2011 after twenty-two years as mayor, Daley could genuinely be said to have had the last laugh. He had exercised power about as nimbly as his father had, turned Chicago into a laboratory for new ideas in urban management, and guided the city’s transformation from a large but inward-looking midwestern metropolis to a place with legitimate global aspirations.

The odyssey of Richard M. Daley is laid out with scrupulous detail in First Son, a new biography by Keith Koeneman that takes Daley from his initial political venture as a state constitutional convention delegate to the final moments of his tenure on the fifth floor of city hall. The book wanders from its subject at times, and the prose is less than dazzling. But it is a valuable book, admirably fair and balanced, and vastly informative about four colorful and highly eventful decades in the life of America’s third-largest metropolis.

Chicago is, for all of its attractions, a deeply flawed city, and Daley accumulated a long list of disappointments to go with his successes. Early in his tenure, he attracted national attention by taking personal control of the city’s school system, but it was only marginally better when he left office than when he started out. The crime rate, and especially the murder rate, remained frighteningly high, fueled by a horrendous gang problem in the poorest neighborhoods. And while Daley prided himself, with some justification, on his skills as a financial manager, he left a heavy load of debt for his successor, Rahm Emanuel.

But all of this must, in the end, be measured against some developments more visible to the naked eye: the glittering downtown that hosts a cavalcade of visitors from virtually everywhere in the world, turning Michigan Avenue on a June Friday night into a promenade equal to what the brightest global cities have to offer; the boom in central-city residential life, which has converted once-dull avenues downtown into thriving corridors for the upwardly mobile and the affluent; the second wind of old working-class neighborhoods close to the center, blighted just a few years ago, as walkable enclaves of the Millennial generation.

Daley did not create the inner-city comeback, but it is fair to conclude that his development policies and sensitivity to Chicago’s physical character made possible changes that other cities are still laboring to emulate. Anyone who sees the visual evidence of Chicago’s more successful neighborhoods is likely to ponder the career of Richard M. Daley and ask: What if he did make a few mistakes?

Of course, Daley’s critics, of whom there are many, are likely to respond that there were more than a few, and they were more than mistakes. These people will argue that he was nearly as much of an autocrat as his father, becoming increasingly impervious to outside criticism as he grew older and more deeply ensconced in office.

To detractors, the most tangible evidence of autocratic mischief was his unilateral order to demolish Meigs Field, an in-town airport for private planes highly valued by much of the city’s business elite. Meigs Field was destroyed in the dead of night in 2002, in order, Daley said, to create a park. Opponents said it was destroyed so Daley could prove his ultimate political control to anyone who doubted it.

It was episodes like the Meigs Field debacle that led to muttering about Daley as a not-so-benign dictator, pursuing the path set out by his father a few decades before. But those particular comparisons don’t quite work. The elder Daley presided over a city divided uneasily by black and white, but he owned the meek loyalties of a political organization in which the white politicians were beholden to him and the black machine aldermen were willing to accept virtual table scraps of patronage in exchange for the votes that kept him in office.

The younger Daley never had a situation like that. He succeeded a pair of African American mayors, came in with the city’s black community highly suspicious of him, and faced a political environment in which unified black opposition might threaten his mayoralty at any time.

Richard M. Daley’s ability to work in this environment stands as perhaps his single most impressive political attribute. He saw the changing demographics of the city, with Hispanics drawing closer to their current one-third of the population, and reasoned that with sufficient Hispanic support he would never have to worry about a black challenger. He offered patronage and political assistance to Hispanic community leaders, and soon converted himself into a majority mayor rather than a minority mayor fighting to hang on.

But Daley cultivated other constituencies that were not part of his father’s world. Soon after taking office in 1989, he served as grand marshal of the annual gay and lesbian pride parade. “I think it is important,” he said, “for me to show my support of the gay community.” Daley’s conspicuous environmentalism—symbolized by his successful determination to place a “green roof” on top of city hall, won over many of the “lakefront liberals” who had constituted the only organized political bloc that had opposed his father. “Talk about a tree person!” Daley once boasted to reporters. “Right here! I’m a tree hugger.”

The early years represented Daley at his innovative best. In addition to taking personal charge of the city’s school system and promoting numerous teaching and management experiments—a bold and valuable move, if a less than triumphant one—the mayor reorganized the slothful and patronage-ridden Chicago Park District, kept finances in good shape, personally supervised construction of the wildly successful Millennium Park along the downtown lakefront, and launched a widely copied series of cultural initiatives with his energetic and creative cultural affairs commissioner, Lois Weisberg.

Daley also led the city into a wide range of experiments in privatization, taking numerous city services and facilities out of public management, a step his father would no doubt have disdained. Foremost among these moves was the decision to sell off the Chicago Skyway, a troubled eight-mile toll road, for $1.8 billion. But nearly every annual budget through the 1990s included the privatization of one government function or another.

When scandals emerged in the Chicago Housing Authority, resulting in the temporary transfer of the city’s housing programs to the federal government, Daley responded with the “Plan for Transformation,” which featured the privatization of all housing management as well as the demolition of fifty dysfunctional public housing towers and the construction of new low-rise mixed-income developments to replace them. By the early years of the new century, nearly all the infamous towers were down, although many of the new projects remained to be built.

Koeneman makes a distinction between the mayor’s widely praised early terms and the later ones, in which he was more autocratic, more impulsive, and less attuned to management detail. Whatever one thinks of this thesis, it is undeniable that the last few years served to tarnish at least a little bit of Daley’s legacy.

For one thing, there were clear signs that the old tradition of shady political dealings had not faded away completely. Patronage ran up to and beyond the level of cronyism. The most egregious example was the Hired Truck Program scandal, in which it was disclosed that the city, as Koeneman tells it, “spent $40 million a year to pay private trucking companies to do little or no work.” Some of these companies were run by close political allies of Daley’s, as was the program itself. “I am embarrassed,” Daley said when the scandal broke. “I’m angry, and I’m disappointed because I feel I’ve let the people down.”

Beyond the evidence of graft that came uncomfortably close to him, Daley suffered serious public policy setbacks in the closing years. An expensive and broadly supported bid to bring the 2016 Olympics to Chicago was shot down in embarrassing fashion by the International Olympic Committee. City finances gradually deteriorated, in part a result of the Great Recession but also a consequence, as Koeneman points out, of a still-bloated city workforce and extravagant public pension commitments. By 2009, Chicago was running a large deficit.

Perhaps worst of all, in the public’s mind, was Daley’s last big privatization venture, the decision to lease the city’s 36,000 parking meters to a private company for seventy-five years in return for $1.2 billion. It was an effort to help with the financial problems, but it led to a dramatic increase in parking charges. An inspector general brought in to assess the situation concluded that Daley should have asked for at least a billion dollars more in payments, or else the city should have held on to the meters, raised rates, and kept all the money for itself.

Chronicling the series of late-career setbacks Daley suffered, Koeneman writes that the mayor “appeared more and more like a prize fighter past his prime, a once-great champion who had stayed in the ring for one fight too many.” But when it comes to measuring the entire twenty-two years, Koeneman ends up, albeit a little nervously, on the positive side. “The passage of time,” he says, “would likely lead to history’s judgment that Daley’s achievements had outweighed his mistakes.” The volume as a whole bears that judgment out.

Alan Ehrenhalt is a contributing editor at Governing magazine.