The prologue to what author Peter Baker calls “a neutral history of a White House about which almost no one is neutral” focuses on the pardon that Vice President Dick Cheney desperately wanted to secure for his loyal aide, Lewis “Scooter” Libby, and that President George W. Bush steadfastly refused to issue. It was not an easy decision for Bush, who agonized about it to the point that, when asked what advice he would give his successor, he didn’t cite anything related to war or the recession but said, “Make sure you set a pardon policy from the start and then stick to it.”

In Cheney’s view, Libby had been left on the battlefield after taking a bullet for him. Bush’s determination to resist his vice president’s entreaties was the final break in a complicated relationship, evolving from a first term characterized by Cheney serving as the president’s lodestar to a second term increasingly defined by Bush’s defiance of what even Cheney called his dark side. 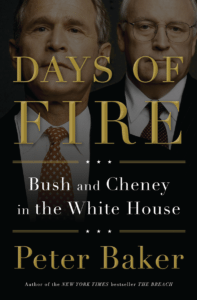 Days of Fire:
Bush and Cheney
in the White House
by Peter Baker
Doubleday, 816 pp.

In his thoroughly researched chronicle of the Bush-Cheney administration, Days of Fire, Baker covers this iconic team from beginning to end in a fair-minded way, painting a generous, even affectionate portrait of Bush as a man who entered the Oval Office with good basic instincts but was easily manipulated by Cheney and others in a White House that was so dysfunctional and with such confused lines of authority that a Texas friend called it a “clusterfuck.”

Just as the Iraq War consumed much of Bush’s presidency, it fills much of Baker’s 816 pages—the early headiness at what seemed a big victory, the unrequited search for weapons of mass destruction, the disillusionment as the war became unpopular. Bush gave up golf—it didn’t look right during a time of war—and took up mountain biking for exercise and to relieve stress. “The more pressure there was at the White House, the harder he rode,” adviser Mark McKinnon observed. Never one to second-guess or appear anything other than resolute in public, Bush nonetheless confessed to Dan Bartlett, one of his principal aides, “I’m just thinking about what I’m going to do in Iraq, and I’m grinding my teeth.”

Baker gives Bush full credit for pushing the surge of troops into Iraq that most analysts believe saved the United States from a full-scale defeat and allowed a more face-saving end to the war. The military had balked, telling Bush the deployment would break the Army. Secretary of State Condoleezza Rice, initially opposing the surge, tempered her support, telling Bush, “This is your last card. It had better work.” Under pressure from friend and foe alike for being out of touch, trapped in a presidential bubble of his own making, Bush pushed back, saying after six years as president, “I see the world as it is, maybe better than most.” Brett McGurk, special adviser on Iraq, remembers Bush saying, “The world needs America to lead. You know why? Because nothing happens if we don’t lead.” Baker writes, “For Bush, the decider, there is no greater sin than giving into nothing happens.”

Reading Days of Fire as President Barack Obama was making his case for using military force in Syria to punish the regime for using chemical weapons, Bush’s words sound prescient. Obama opposed Bush’s mostly go-it-alone approach in Iraq, but mustering international and congressional support for strikes in the Middle East proved so daunting that Obama backed down, while leaving open the possibility that he, like Bush, could act unilaterally if diplomacy failed.

Bush spent more time away from the White House than even Ronald Reagan, but nobody could accuse him of not being engaged on Iraq. He made four secret trips to the country; on the last one, after the 2008 election, he told Iraqi President Nouri al-Maliki that Texas is just like Iraq. “We got desert, oil, tough folks, lots of guns.” Maliki disagreed, saying there is “no place like Iraq, believe me.”

Bush did not agree to an interview after leaving the White House, and his office sent an e-mail to friends and associates explaining that he didn’t think a New York Times reporter could write fairly about his presidency. The ban relaxed over time, and the depth of reporting in this book suggests cooperation from all the major players, including Cheney, who sat down with Baker to offer his post-White House reflections.

Never one to sugarcoat anything, Cheney recognizes that to a great extent he was sidelined during Bush’s second term. He attributes it more to Bush’s evolution as president than to anything Machiavellian, and the Cheney that emerges in Baker’s epilogue seems more interested in talking about the dream retirement home he and his wife Lynne custom-built in McLean, Virginia, just down the street from Hickory Hill, where Ethel Kennedy lived, the elevator they had installed, and an apartment over the garage where a caretaker could eventually live. He expresses no regrets for the heavy-handed national security apparatus he helped usher in, saying it was “the right thing to do. It worked. We haven’t been hit for seven and a half years, longer than that now.”

Reflecting Cheney’s enormous influence during Bush’s first term, Baker titles one chapter “I’m Going to Call Dick,” which was Bush’s default position on everything. Cheney, for his part, was dutifully respectful to Bush at all times, never taking a commanding role in meetings, and often remaining so silent that aides were left to guess what he might be saying to the president in private. “Cheney’s role was like watching iron filings move across a tabletop,” says speechwriter David Frum. “You know there is a magnet down there. You know the magnet is moving. You never see the magnet.”

Everyone seems to agree that while Cheney’s hidden hand guided the first term, Bush was a willing copilot, playing the brash “Don’t mess with Texas” front man to Cheney’s behind-the-scenes hard-edged and assertive policies. Their friendship began to fray as Bush’s dependence on Cheney began to wane, and among the markers along the way was how Cheney and his loyalists handled the vice president’s accidental shooting on a hunting trip of his friend Harry Whittington, a seventy-eight-year-old lawyer. On the advice of longtime adviser Mary Matalin, they leaked the story to a Texas newspaper, keeping the White House and the Washington press corps in the dark. When the strategy backfired and Bush aide Nicolle Wallace urged Cheney to come clean and do an interview with Brit Hume on Fox, Matalin lit into her: “You are a fucking press lover.” Bush was pulled into the fray, and Cheney did the interview.

The episode had a lasting impact, transforming the way Cheney was regarded in the White House from all-knowing guru to something of a joke. The elevation of Rice to secretary of state, and then, after the 2006 midterms, the replacement of Defense Secretary Donald Rumsfeld—about which Cheney was informed, not consulted, despite his close friendship with Rumsfeld—signaled the emergence of a more confident Bush, less reliant on Cheney’s singularly dark view of the world. Bush’s second-term “freedom agenda,” with the goal of “ending tyranny in our world,” was just as unrealistic, though less bloody than the regime change of his first term.

The New York Times is the paper of record, and Baker writes in that tradition. Most of the book is drawn from his reporting, and the rest he documents in detailed footnotes. The access he gets to White House officials rivals that granted to the Washington Post’s Bob Woodward for his books, but unlike Woodward, Baker doesn’t rely on anonymous sourcing. Just about everything is attributed, a feat in itself when reporting on the White House.

Now that Baker is covering the Obama White House, the giblets in Days of Fire about Russian President Vladimir Putin are especially illuminating. Remember, Bush looked into Putin’s eyes and saw his soul. They bonded over their shared Christianity, but then in a trade dispute, Russia cut off imports of American chicken drumsticks; Putin accused the U.S. of having separate and unequal plants for the “Bush legs” sent to Russia. Bush was astounded by his Cold War paranoia, telling a visitor to Camp David that negotiating with Putin was “like arguing with an eighth grader with his facts wrong.” When the Russian president began closing down media outlets, Bush would confide that he didn’t think Putin was a democrat anymore: “He’s a tsar. I think we’ve lost him.”

Days of Fire is less about bold-faced headlines and more about a nuanced portrait of the series of events and personal interactions that go into the scoreboard of a consequential presidency. Baker gives it his all in this book, with color detail worthy of a play-by-play account. A sampling: Bush once showed up in a purple Gremlin at the Richard Nixon White House for a date with the first daughter, Tricia. He was more confident than his advisers that he would win reelection, “because John Kerry is an asshole.” And for aides who accompanied Bush to his Texas ranch, there was a hierarchy for clearing brush, according to Bush’s trip director:

When you start, your job is basically, after someone cuts down a tree, to drag it out of there and put it wherever it is going to go. Then, if you really did good at that, the next level up was you could be in charge of making a pile of all the things that had been dragged over so that it burned well when you lit it on fire. If you were really good at that, you might be able to, one day, get to use a chain saw.

If there’s an analogy there, Baker wisely leaves it up to the reader to find it.

Buy this book from Amazon and support Washington Monthly: Days of Fire: Bush and Cheney in the White House

Eleanor Clift is a contributor to the Daily Beast Web site and a panelist on the McLaughlin Group.