Yesterday was a beautiful day for predicting the end of the world. Apparently life as we know it will come to an abrupt halt a week from tomorrow. That, at least, is the opinion of Harold Camping, a preacher from Oakland, California. At about 6pm (PST, I’m assuming), he is predicting that about two percent of the world’s population will be “raptured” to Heaven, while the rest of us will go to hell. 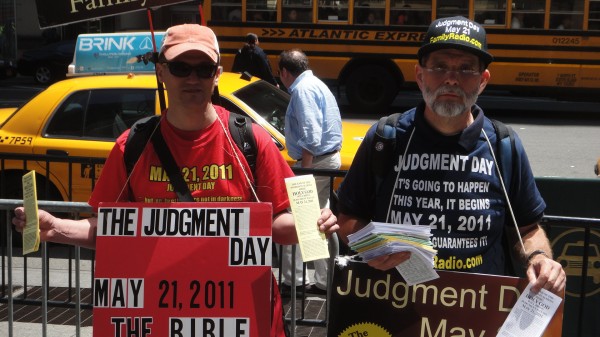 The founder of the Family Radio Network (which owns 66 stations, has assets of $120 million, and broadcasts in 48 languages), Camping has spent his life studying the Bible. According to The Independent, Camping “developed a system that uses mathematics to interpret prophesies hidden in it.” Judgment Day will fall on May 21st, “because that will be 722,500 days from 1 April AD33, which he believes was the day of the Crucifixion. The figure of 722,500 is important because you get it by multiplying three holy numbers (five, 10 and 17) together twice. “When I found this out, I tell you,” he told The Independent, “it blew my mind.”

Camping previously predicted that the end of the world would fall on September 6, 1994. Instead, Aerosmith, Lisa Marie and Michael Jackson were big winners at the MTV Awards. “At that time there was a lot of the Bible I had not really researched very carefully,” Camping acknowledges, “But now, we’ve had the chance to do just an enormous amount of additional study and God has given us outstanding proofs that it really is going to happen.” What proof? Earthquakes in Japan, New Zealand and Haiti, for starters. Plus “All the stealing, and the lying, and the wickedness and the sexual perversion that is going on in society. So too is the gay pride movement. It was sent by God as a sign of the end.”

See you at the Rapture. Well, maybe not you.