. . .the party is over for Friday Night Lights, a terrific television series based on an excellent Peter Berg movie based ona very good Buzz Bissinger book. The story of a high school football coach and his wife, his players, their families, and the culture of small town football, Friday Night Lights did an excellent job of creating characters and situating them not just in a cultural milieu, but an emotional one as well. Never has a series worked as hard to show all the social strata in a town that is thrown together in a high school. The actors were terrific: anchored by Kyle Chandler and Connie Britton, the cast seemed exceptionally real. Other standouts over the years included Adrianne Palicki, Taylor Kitsch, Brad Leland, Aimee Teegarden, Michael B. Jordan, and many many more. 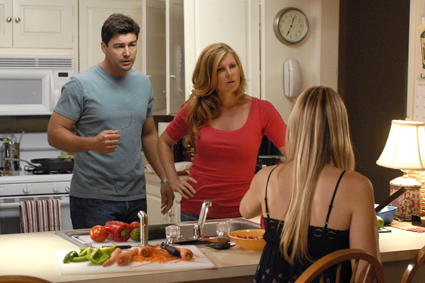 Was this the best conservative television series ever? Quite possibly. The fundamental values of the series were family, work, self-sacrifice, teamwork,and submission to authority. Individualism was accepted, but it had its place (indeed, one of the faults is that if you were successful in upholding one of these values, like teamwork, dysfunctional individualism was overlooked.) How I wish conservatives would promote these values, rather than the causes of big business and religious fundamentalism they instead espouse. Coach Taylor was a benign dictator; often intolerant, unreasonable, and close-minded when presented with a problem, he would often enlarge his views after receiving the good counsel of his wife, which he valued. He was not unchanging, but he was always firm, which is a pretty good combo for a leader.