I don’t know if people still give Labor Day speeches about the working men and women who built this great land, but there were two articles written about labor earlier in the week that ought to boil the blood of every working stiff, whether blue collar, white collar, pink collar, no collar, or whatever.

First, Paul Krugman continued his laceration of heedless, brainless Washington. “Ever since the acute phase of the financial crisis ended,” Krugman wrote in the Times, “policy discussion in Washington has been dominated not by unemployment, but by the alleged dangers posed by budget deficits. Pundits and media organizations insisted that the biggest risk facing America was the threat that investors would pull the plug on U.S. debt.” But if that were the case, Krugman points out, interest rates would have risen. Instead, they have fallen from 3.7% in May of 2009 to two percent as of last Friday–nearly a drop in half. “By obsessing over a nonexistent threat, Washington has been making the real problem — mass unemployment, which is eating away at the foundations of our nation — much worse.”

Meanwhile, at The Washington Post, Harold Meyerson blasts one of the intellectual cornerstones of at least the last two decades: that the post-industrial economy will bring prosperity. “What a crock,” says Meyerson. “On Labor Day 2011, the America that’s replaced the vibrant industrial giant of the mid-20th century is a basket case. We’ve lost the jobs that created the broadly shared prosperity that made us the envy of the world. In their place, when we’ve created jobs at all, they’ve generated neither prosperity nor security. . . . Today, the economy that arose on manufacturing’s ashes has turned to ashes itself. The Wall Street-Wal-Mart economy of the past several decades off-shored millions of factory jobs, which it offset by creating low-paying jobs in the service and retail sectors; extending credit to consumers so they could keep consuming despite their stagnating incomes; and fueling, until it collapsed, a boom in construction.”

Here’s my question: where the hell are the Democrats? I’m thrilled Krugman and Meyerson are saying these things, but why aren’t Barack Obama and Joe Biden?

When I was learning about politics during the sixties, there was one thing you had to understand: the Democrats were the party of the working man, and the Republicans were the party of business. Obviously that’s a division that’s a little too black and white, but it’s essentially correct. The narrative espoused by the Democrats was built on the concept of Equality–first equal rights for immigrants and the laboring class, and then, slowly but surely, for African Americans, for women, and for other classes of the discriminated against. Republicans never were much for equality; they were for prosperity and against communism. But the Democrats were always for the working man–for the end of child labor, for safe working conditions, for a minimum wage, and so on. And with their efforts, and with the courage of the labor movement, the great economic engine of the American Middle Class was born. 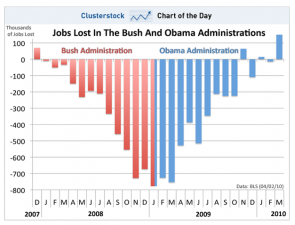 By the time the eighties came around, Democrats had run out the string on equality, and the Republicans had discovered Freedom as their organizing principle, and a very good one it was. You could be in favor of Freedom from communism, from terrorism, from government regulation, from unions, from banking or financial limits, and especially freedom from anything that prevented you from doing whatever the hell you want to do. The Democrats competed by becoming more like the Republicans, except we would be more churlish about it. And we would support a woman’s right to choose.

The Democrats need to get back to their roots–get back to their roots, or get out of business. We have been too smart for our own good for too long, cheering NAFTA (Yes, literally cheering Al Gore as he swatted Ross Perot), embracing the ravages of the digital revolution as temporary broth pangs, cheering the end of Glass-Stegal because 75 years of financial stability wasn’t worth all the gold that could be alchemized with credit default swap gibberish.

This country needs job creation, job protection, taxes on the super rich, an end to hedge fund protectionism, and better education. We need to end the huge earnings disparity between workers and executives. Everyone in this administration is too damn polite (and apparently inept, but that’s another story.) According to ABC News’ The Note, in April 2009 Obama told the chief executives of the nation’s thirteen largest banks “My administration is the only thing between you and the pitchforks.”

That was one of his first mistakes, and it seems clear he hasn’t yet unlearned it. But somebody among the Democrats damn well should start getting the party out of the barricade business, and into pitchforkin’.