In The Washington Post today, Matt Miller argues for the need for a third party. “There’s a staggering void in the debate,” he writes. “The parties act this way because their core constituencies have a stake in a failed status quo. But where does that leave the majority of us who are not in the Republican or Democratic base? Where does it leave the country? Daniel Patrick Moynihan wisely observed that if issues can’t be discussed, they can never be advanced. Given the abdication of both parties, and the pinched boundaries of debate we’re thus left with, the only way to learn if a constituency can be built for a bold agenda to renew the country is for independent candidates to try to do just that in 2012. This doesn’t mean both parties are equally to blame for Washington’s dysfunction. But they’re unacceptable and disappointing in their own ways.. . . [W]ith America on the road to slow decline, the stakes are too high for “inadequate” and “retrograde” to be our only choices.”

Miller is right in his analysis but more than a little dreamy in his solution. The obstacles to a third party are exhausting to consider. My preferred solution, which is plenty dreamy enough, is reapportion reform. If independent agents redrew the election districts in the states with the mandate to minimize the number of safe seats for either party, and to maximize the number that would be competitive, most of the extremism that characterizes our politics today would disappear. Both Democratic and Republican candidates would have to compete for the big middle. All views would still get aired, and the hardcore elements of both parties would still have influence. But no longer would they be able to shut down the political process as the GOP did during the debt ceiling issue.

Is this idea too dreamy? Not really. Fair play is a core American value, and instinctively we repel against the most extreme of the gerrymandered districts, regardless of which party we favor. Moreover, increasing competition is a neat market solution is an inherently comprehensible path to take in a country that likes market solutions to problems. This is a path that would open up with only a little pushing. Already California has moved in this direction, and as California usually goes, so goes the nation. It’s too late to do anything about reapportionment this time, but reform should be advanced now, while the concept is fresh in the public’s mind. 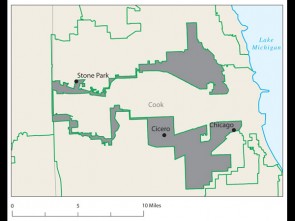 Above: Illinois’s laughable, reprehensible Fourth District, taken from an excellent slide show that appeared in Slate in 2009.