Nothing in John Brown’s life more became him than the way he took leave of it. One of the strangest and most challenging figures in American history, a combination of practical fiasco and undiminished confidence, Brown, the revolutionary abolitionist in the United States, was a failed tanner, a failed farmer, and in narrow terms, a failed insurrectionist. As much as anybody, he put the blood in Bleeding Kansas; his activities there in the mid-1850s were crowned with the cold-blooded midnight murder and dismemberment at Pottawatomie Creek of four unarmed men who had the misfortune of having a different point of view than the country’s most driven abolitionist.

Brown was a terrorist in the cause of God’s will, no less than Mohammad Atta. Terror was the only thing he was good at, and murderous, bloody terror was what he intended to ignite when he and his platoon of twenty-one true believers seized the federal armory at Harper’s Ferry, Virginia, on October 16, 1859. The raid was a dismal botch, and within forty-eight hours, Brown and his men had been easily vanquished, ten of them killed in action. Brown himself was bludgeoned into unconsciousness in the final assault on his stronghold in the armory by a marine lieutenant named Israel Green, but only after had attempted to kill him with his sword. Hastily mustered the night before, Green had brought a light ceremonial sword instead of a battle sabre, and when he stabbed Brown, the blade bent in half. Had he successfully killed Brown, it is unlikely that the raid would have inflamed the country as it did, and the incident would eventually have become eclipsed in memory, overcome by other events. 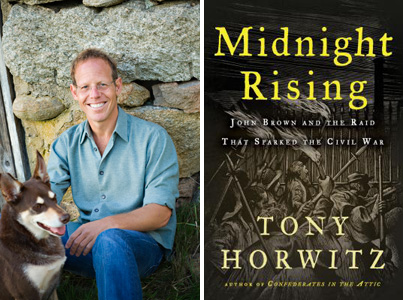 Instead, Brown survived, and in ensuing six weeks, became a most eloquent champion of ending slavery. “I believe that to have interfered as I have done — as I have always freely admitted I have done — in behalf of His despised poor, was not wrong, but right,’’ said Brown at his trial. “ Now if it is deemed necessary that I should forfeit my life for the furtherance of the ends of justice, and mingle my blood further with the blood of my children and with the blood of millions in this slave country whose rights are disregarded by wicked, cruel, and unjust enactments– I submit; so let it be done!’’

Throughout the north, and in Europe as well, Brown’s noble attitude elevated him to the status of martyr, and stirred the anti-slavery feelings that in most of the population had been largely latent. Emerson and Thoreau applauded him, John Greenleaf Whittier celebrated him in poetry, and Victor Hugo honored him from abroad. “Living, he made life beautiful,” Louisa May Alcott wrote on the day he died, “Dying, made death divine.” Feelings were stirred in the South, too; the whites of the South were rightly alarmed that a blow had been struck, however ineptly, at their slaveocracy, and were entirely shocked that their northern cousins were far more sympathetic than outraged. Brown may have failed to incite a rebellion, but he had polarized the country, and made the continuation of a country half-slave and half-free an impossibility.

In his excellent new book Midnight Rising: John Brown and the Raid That Sparked the Civil War, Tony Horwitz has done a terrific job in explaining the raid and its effects. More than anything, he has restored Brown’s humanity. Long portrayed as a fiery-eyed zealot, Brown here is portrayed as a man defined by a willingness to act on his convictions. If slavery was immoral, then acting to end it could not be. Prior to his capture, Brown could be defined by all the things that he wasn’t—a successful farmer, a successful businessman, a shrewd strategist. After his capture, he became the thing he was at his core: a man who saw evil and could not countenance its continuation. Not two years after his execution, as his countrymen took arms against the slaveholder, they went into battle singing that his truth was marching on.