Yesterday I read Paul Krugman’s post on Reed Ableson’s post on the recent study showing that employment-based coverage is eroding, and quickly: 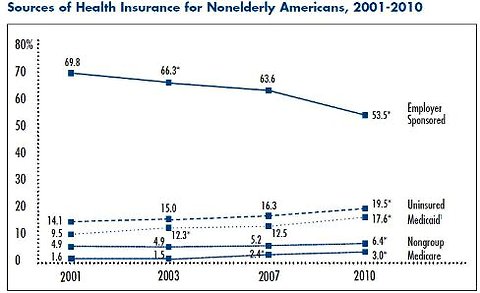 What this says is that the system that has provided workable insurance coverage to many (but not enough) Americans is coming apart at the seams. And this in turn means that if health reform goes down, we’re going to be looking at a wave of misery spreading across the land.

I’ve seen a lot of chatter about this over the weekend. To be honest, I don’t understand much of the excitement. Not because I don’t believe this to be true, but because we’ve been watching it happen for some time, even before the recession. Here’s a chart I’ve made with CPS data for the last decade: 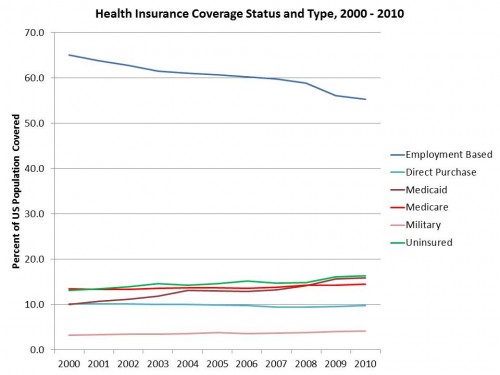 For kicks, I’ve made “private” insurance sources bluish, “government” sources reddish, and the uninsured green. As you can see, employment based-insurance has been eroding for a while, with a dip around 2007-2008. So this is known. Here’s a closeup of those later years: 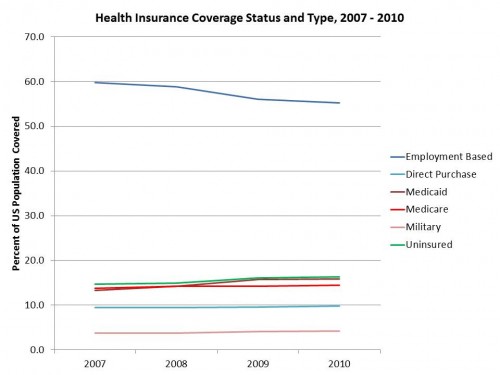 What’s interesting, though, is that the new survey shows a much steeper dropoff than the CPS data in recent years. This is, in part, due to the fact that up until this last data point, the survey has always had a higher estimate of employment-based coverage than the CPS. Ironically, I think I’ve had people use this survey’s data in the past to counter my concerns in previous years that employer-based coverage has been eroding. But this year, the survey shot past the CPS data to show lower coverage. Here are the two data sources together: 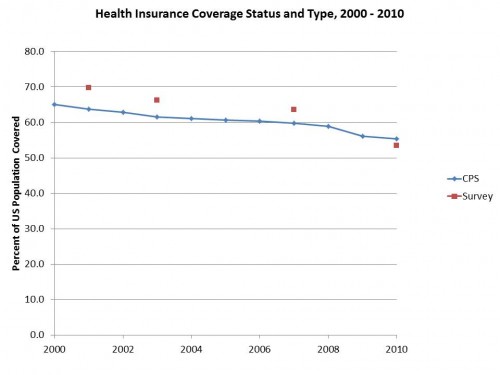 So while both show a decline, the survey shows a much steeper decline than the CPS data since 2007. Now I don’t know which is more “correct”. I’ve always assumed the survey was more conservative than the CPS, so I followed the trends of both (which both look bad for employer-based coverage). But if the survey is “superior”, then things are really bad.

Anyone have any ideas what might account for the reversal? The flip is one of the reasons for the severe coverage dropoff that has people like Krugman concerned. I wonder if it’s real, or if there was some change in the way the survey measured data in 2010 that made it all of a sudden look worse than the CPS, instead of better.