The Determinants of Mortality (ungated pdf), by David Cutler, Angus Deaton, and Adriana Lleras-Muney is worth a full read. Here are some teasers. 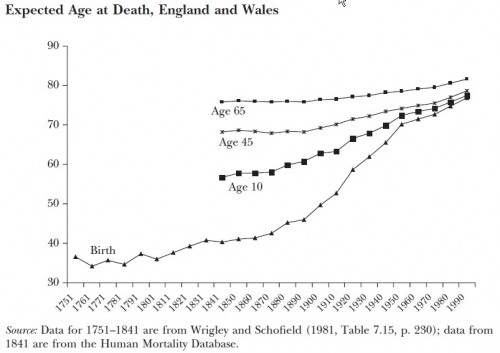 For most of human history, life was properly described in the famous phrase of Thomas Hobbes as “nasty, brutish, and short.” From the dawn of Homo sapiens perhaps 100,000 years ago until the first agricultural revolution in roughly 10,000 BCE, world population was about four million people. Life expectancy at birth for our hunter-gatherer ancestors was perhaps 25 years. There had been little, if any, progress by the Roman Empire, and even in 1700, life expectancy at birth in England—after the Netherlands, the richest country in the world at the time—was only 37 years (Wrigley and Schofield, 1981).

One driver of change in life expectancy would seem to be wealth. On the other hand, longer lives themselves may promote wealth. Cross-nationally, wealth, as measured by GDP per capita is correlated with life expectancy, but check out the huge change in slope somewhere around $4,000. 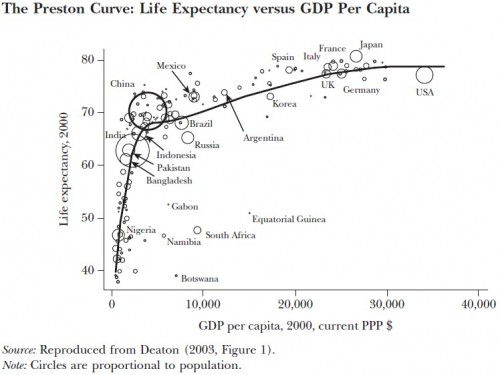 Yet, wealth is not decisive:

Many countries have shown remarkable improvements in health with little or no economic growth, and vice versa. For the two largest countries, India and China, there is a negative correlation between decadal rates of economic growth and progress in reducing infant and child mortality. Almost all of China’s remarkable post-World War II reduction in infant mortality happened prior to the acceleration in economic growth after 1980, after which there was relatively little progress in child health. Similarly, in India, the acceleration of the rate of growth after the economic reforms in the early 1990s was accompanied by a slowdown in the rate of decline in infant mortality.

In the US and countries with similar development paths, recent longevity gains have come principally from lower mortality from cardiovascular disease and infectious diseases. 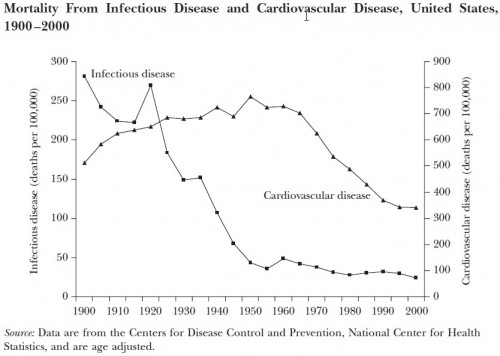 Looking at this evidence as a whole, we see the history of mortality reduction [in now-developed countries] as encompassing three phases. The first phase, from the middle of the eighteenth century to the middle of the nineteenth century, is the one where improved nutrition and economic growth may well have played a large role in health— although this is hotly debated, and incipient public health measures were certainly important as well. In the closing decades of the nineteenth century and into the twentieth, the second phase occurred, in which public health mattered more—first negatively, because of high mortality in cities, then positively in the delivery of clean water, removal of wastes, and advice about personal health practices. The third phase, dating from the 1930s on, has been the era of big medicine, starting with vaccination and antibiotics, and moving on to the expensive and intensive personal interventions that characterize the medical system today.