Zirui Song and Bruce Landon summarize the state of Massachusetts’ health care costs (high) and what state officials are attempting to do about it (a lot). Their short New England Journal of Medicine piece is ungated, so you can read it for yourself. The following two statistics caught me by surprise:

1. The five organizations in the eastern part of the state that are participating in the Pioneer Accountable Care Organization (ACO) program account for 75% of Medicare beneficiaries in the Boston area. Is the Medicare population associated with ACOs anywhere near that level in any other city? I doubt it. Boston is the ACO capital.

2. In 2012, health care will consume a majority (54%) of the state’s budget. Among the states, is that the highest proportion? It believe so. Massachusetts is the health spending king. 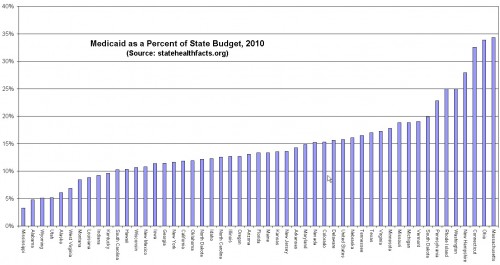