Here is an Iron Law of the era: When rich guys talk about freedom, hold on to your wallet. They are almost always talking about ways to make themselves more free to get more money.

Case in point: in an interview with The Guardian on Sunday, Sergey Brin, the co-founder of Google, said that the principles of openness and universal access that underpinned the creation of the internet are under threat. “Very powerful forces have lined up against the open internet on all sides and around the world”. Brin says that the threats come from governments increasingly trying to control access and communication by their citizens; the entertainment industry’s attempts to crack down on piracy; and the rise of “restrictive” walled gardens such as Facebook and Apple, which tightly control what software can be released on their platforms.

Brin has accumulated a fortune that Forbes says is worth $18.7 billion, by creating a powerful research tool that has almost achieved monopoly status in its ability to help find information. And what he seems to be objecting to is the ability of others to infringe on his monopoly. 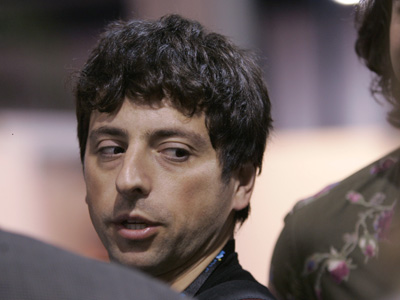 Brin seems most reasonable when he objects to government interference in the ability of its citizens to use the web. Everyone hopes that the efforts of China, Iran, Russia, North Korea and Saudi Arabia soon collapses in failure. But Brin objects not only to traditionally authoritarian states, but also to Great Britain, which plans to monitor social media and web use. The UK is doing this in response to concerns about terrorism and about criminal activity. Now, anyone with half a brain knows that whenever a government monitors its citizens, the government itself has to be watched with a close and skeptical eye. But fighting terrorism, child pornography and cyber-bullying are activities squarely within the legitimate police power of the state. Do we want to stop terrorists from conspiring in restaurants but allow them to plot away in cyberspace? Don’t be daft.

Now look what else Brin objects to: the attempts of entertainment companies to fight piracy. Where is freedom under threat here? I don’t think stopping people from stealing the work of other people is a threat against freedom. It’s a pollution of the language to think otherwise. Brin also objects to the tight control Facebook and Apple exert over their platforms. “There’s a lot to be lost,” he said. “For example, all the information in apps – that data is not crawlable by web crawlers. You can’t search it.” He says that under such rules, he and co-founder Larry Page would not have been able to create Google. “You have to play by their rules, which are really restrictive,” he said. “The kind of environment that we developed Google in, the reason that we were able to develop a search engine, is the web was so open. Once you get too many rules, that will stifle innovation.”

It seems to me that the main reason Brin is objecting to other people protecting their property is that it makes his property less valuable. He says that he’s concerned that having these kinds of regulations will stifle innovation. I’m sure he’s right. Look how locks and safes have stifled growth and innovation in the field of bank robbery.

It was interesting to place Brin’s spirited defense of freedom in light of Google’s announcement last week that it was going to split its stock. It seems that the freedom that Brin so staunchly champions in cyberspace is not something he values as much on such real world places as Wall Street. As Andrew Ross Sorkin reported in The New York Times on Monday (speaking of places that probably wished it could have preserved the value of its intellectual property on the internet), Brin, Page and company chairman Eric Schmidt “cleverly” created the stock split so that Google could issue a special new class of shares to current shareholders. The catch: the new class of shares has no voting rights. “In other words, the entire point of the stock split was to solidify the founders’ control of the company by diminishing the future voting power of the shareholders. So even as the founders continue a plan to sell some of their shares over the next three years through a program they enacted in 2009 and the company continues to issue new shares to employees, they have developed a plan to retain an iron grip over Google.” This decision will be put before shareholders at the company’s annual meeting, but since these three principles own two-thirds of the company, the result is a foregone conclusion: with every new non-voting share they sell, the voting shares they retain will be all the more powerful. “At a time when shareholders are increasingly seeking a bigger voice and more democracy,” says Sorkin, “Google is going the other way.”

It’s not threats to freedom that Brin wants to stop. It’s threats to his power.

Meet the new boss, same as the old boss.