The other day in a post about some of the recent activities of Google’s Sergey Brin , I postulated a new Iron Law of the modern era: When rich guys talk about freedom, hold on to your wallet. They are almost always talking about ways to make themselves more free to get more money. Or at least more of something that they want.

Here’s another example, this time from the speech that Mitt Romney gave at last week’s convention of the National Rifle Association. “Freedom is the victim of unbounded government appetite and so is economic growth and job growth and wage growth,” Romney said. “And as government takes more and more, there’s less and less incentive to take risk and to invest and to innovate and to hire people.”

First, one man’s inadequate return is another man’s golden opportunity. Last week I was at a newspaper stand the day after the big Mega Millions jackpot was won. A customer asked the lottery agent how much the new pot was worth. “A million,” the agent replied. “About $500,000 after taxes.” 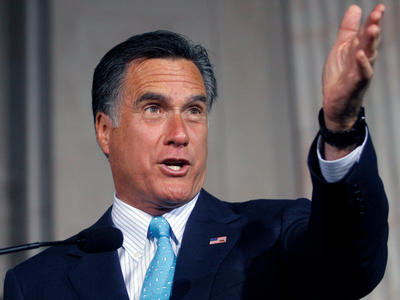 I guess there are more than a few people like that customer–and Romney–but clearly a lot of other people bought tickets, even for that scrimpy amount. it seems to me that the world is full of people who are willing to accept various rates of return for their investments. Next month a whole crowd of people are likely to be assembled to buy Facebook stock, and I doubt that even one of them will be slowed by the unsettled state of the Bush tax cuts. They will have visions of sugar plums dancing in their heads, and the thought that the government would get its cut will dissuade them not a jot or tittle.

What I think the tax levels do affect is a corporation’s decision about where to locate. I would call that a different problem, but I can see where Romney would say that high taxes affect his freedom to headquarter his company in the USA without paying a portion of profits in taxes (or without staffing up the tax department, a la General Electric, and filing a ten thousand page tax return that completely eliminates the company’s tax charges.)

But this general conception of freedom as something that is being threatened by the government is an odd complaint to have, particularly in a flourishing democracy. First, you can rhetorically manipulate this idea of freedom so that it means anything. Laws against Grand Theft Auto limit my freedom to steal a Jaguar. No one is crying about that. Besides, while freedom may be what government limits, t is surely also what government bestows: the government preserves our freedom not to be killed by terrorists, or to be robbed by predators, or swindled by unscrupulous financiers, or poisoned by people who would carelessly allow e. coli bacteria into by hamburgers, or worked to death by avaricious managers. Surely even Romney would acknowledge that government helps secure our freedom from want, our freedom from fear, and our freedom of self-expression. Second, freedom isn’t even necessarily the thing we value most. Part of living in a democracy is accepting that one doesn’t always get one’s way, and that sacrificing that kind of total freedom one might enjoy in a state of nature is the price we pay for the benefits of living in a society. Freedom is not the highest and best good; ask anybody who is reasonably happily married.

Hey you don’t need to be Frank Luntz to play this game. Everything we value can be expressed as a freedom of, from or to do something, and everything we dislike can be expressed as limit on a freedom. (“A freedom not to eat broccoli,” as Justice Scalia might observe.) But if freedom is going to mean anything in our discussions, it can’t be bandied about promiscuously, like it was a catch phrase form an Adam Sandler movie.

Or from a Mitt Romney speech.