I know this is outside of my usual wheelhouse, but I’ve been playing with the FRED Plug-In for Excel (h/t Jared Bernstein). It has tons of up-to-date data, and allows for easy graphing.

So I made this nice chart showing how the unemployment rate has varied with how long people are unemployed over time. FRED let me easily import monthly data since 1948. I’ve coded all the recessions in that time period, including the most recent “Great Recession”, and the time since that ended. Please, someone, tell me how we’re not screwed. 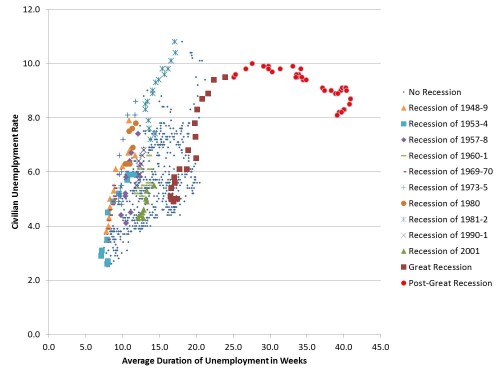 The amount of time an American is unemployed recently is unprecedented since 1948. It just looks so bad. Someone make me feel better.