The big news today is President Obama’s announcement that his administration will stop deporting “Dreamers,” undocumented immigrants who were brought here as children, and will also grant them work permits, subject to some conditions. Ed has a good read into the details of the mainstream politics here.

But one thing few people are talking about is the reaction in the US Spanish-language press. My Spanish isn’t perfect, but I can get through a newspaper, so I did some very brief reading. First I went to Univision, where the most-read story right now is on the announcement. The same is true of Telemundo. It’s on the front page of Spanish CNN and El Nuevo Herald. The articles play it dry, but still give it a fairly positive gloss.

Meanwhile, the biggest name in US Spanish media, Univision anchor Jorge Ramos, took to Twitter to break the news: 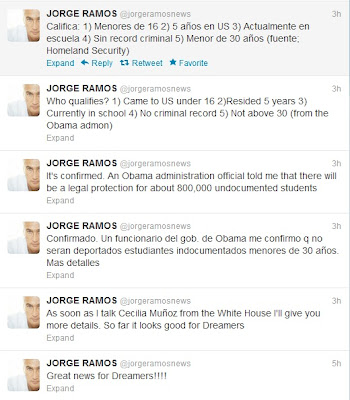 If that’s hard to read, Ramos seems very positive thus far: “Great news for Dreamers!!!” he wrote, and went on to explain the new policy in both Spanish and English. (Top that, Brian Williams.) In case you’re not up to speed on Mr. Ramos, now might be a good time to read our profile of him in our last issue. He has the kind of credibility and trust among his viewers that simply doesn’t exist anymore in the English-speaking media, and could very well decide the election.

UPDATE: Ramos later explained that, though this doesn’t include anything on green cards or a path to citizenship, in his opinion “esta es la mejor noticia para los indocumentados en 26 años. (This is the best news for immigrants in this country since 1986)”