Visitors to the Washington Monument now see an interesting installation. Lots and lots of school desks. 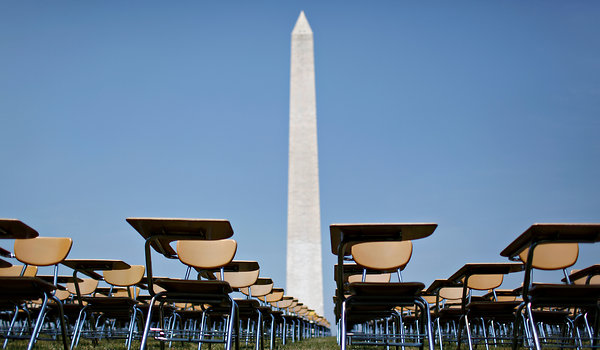 This is a display representing the 857 students who (statistically) drop out of American high schools every hour of every school day. This is a project of the College Board’s Don’t Forget About Ed campaign, which urges presidential candidates Barack Obama and Mitt Romney to make education a more important part of their campaigns. It’s not going to happen.

That’s because the Obama and Romney pretty much agree on education.

America’s education system is in turmoil. Right now, our schools are performing at a level far below almost every other major industrialized nation. And the statistics continue to get worse every year. How we educate our children affects not only their own chances for success and prosperity, it also directly affects America’s economy, health, and national security.

As we head towards the 2012 Presidential election, the issue of education is underplayed on the campaign trail. The candidates say they care about education, but what seems to be missing from their speeches are real, tangible, effective solutions for turning our education system in the right direction.

Join us in having your voice heard. Sign the petition today to help make sure the candidates Don’t Forget Ed.

In fact, both candidates already ready have “solutions” for education. Here are Mitt Romney’s ideas. here are Barack Obama’s.

Both candidates have education platforms reflecting what they believe to be “real, tangible, effective solutions for turning our education system in the right direction.” But their education ideas aren’t ever going to become important to the presidential campaign. Because there’s no controversy here.

Apart from vouchers and the slap at teacher certification, Obama’s Race to the Top program for schools promotes virtually everything Romney proposes—charters, competition, accountability, evaluating teachers by student test scores. If anything, Secretary of Education Arne Duncan has been as outspoken on behalf of charters and test-based accountability as Mitt Romney. And, like Romney, Duncan has disdained the issue of reducing the number of students per teacher.

Ravitch is a controversial figure, but she’s not wrong. Whether or not these reform ideas are any good is perhaps a matter for debate, but not between Romney and Obama. There are a few other differences (Romney wants to return student loans to the banks, for instance) but the only really important matter of disagreement is the former Massachusetts governor’s support for school vouchers.

It might be useful for improving public policy if education played a more important role in the campaign but there’s simply no incentive for either candidate to do this. They agree on almost everything, and that’s something no political candidate wants to emphasize, even if his ideas are good and widely accepted. Unless we want to make this the voucher campaign, there’s no way education is going to matter much in this race.