I met the great Nora Ephron just about 30 years ago, when I was a young junior executive in the great John Scanlon‘s public relations agency. We had been hired to work on the film Silkwood, in part through Nora, who was one of John’s Hamptons friends. I really didn’t have anything to do with with the account; John’s partner, Ed Menken, was hot to handle our small show business practice. He really liked hobnobbing with the stars and the directors, and he had the kind of energy that might have made him a successful producer or agent. He wasn’t very good as a PR man, in part because he never really studied how the news business worked. Instead, he was prone to brainstorms, sometimes inspired, but usually stupid. For example, when Columbia Pictures hired us to develop off-the-entertainment-page press for the film Gandhi, Ed was struck by a bolt of brilliance. “Let’s start a campaign to get Gandhi the Nobel Peace Prize!” he shouted, delighted at his own ingenuity. It didn’t do any good to tell him that the Nobel people didn’t give awards posthumously; I had to pretend to call Stockholm, and pretend to lobby to the Nobel people on Gandhi’s behalf, before reporting that alas, the small-minded Swedes said no.

One reason our agency had been hired for Silkwood was to substantiate the film. The picture was about Karen Silkwood, a young woman with a messy personal life who worked in a nuclear energy plant, and who had been blowing the whistle on incidents of safety violations just before she ended up mysteriously dead. Ephron and her collaborator Alice Arlen has written a careful script that adhered to the facts and avoided sensationalism, and they and the studio and director Mike Nichols wanted critics and others who were going to write about the story to know that Nora and Alice hadn’t made anything up. 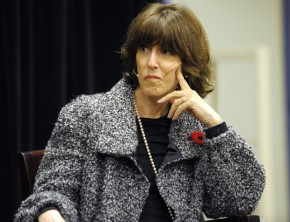 A very reasonable desire. A fairly standard assignment. Except Ed didn’t do it. He put it off and put it off, and finally, just before Columbus Day weekend, when the thing was already overdue, he dumped the assignment on me. I could understand why. The movie was stuffed with stuff to be fact-checked–personal, legal, scientific–and Ed had only collected a couple articles from The Village Voice to refer to. “Don’t worry about it,” Ed said. “All you have to do is write something that answers four questions.” The first one was “Who was Karen Silkwood?” The others I no longer remember but they similarly simple, and I typed up a few pages for Ed that he pronounced satisfactory, which he then sent to Nora. Later in life I would see the voluminous press notes that are prepared for films, and would understand evidently what Ed did not: the document had to be thick, not merely thick enough to substantiate the film, but so thick as to discourage anybody from even questioning it. “Ah, fuck it,” thick, in other words. More than three or four pages thick, in other words.

Over the weekend, my beloved boss John Scanlon called and told me that Nora had a couple questions. He asked me to go see her on Columbus Day to find out what was on her mind.

Ephron lived in the Apthorp, a magnificent building on Broadway on the west side, in an enormous ten or eleven room barn of an apartment that always makes me weak. Ordinarily I would have demonstrated a lot of awestruck apartment envy, which most occupiers accept as personal reverence, as though the apartment was a sign that they had lived the sort of morally upright life that deserved to be rewarded with a great apartment. But Ephron wasn’t interested in my awe. She was interested in flagellating me.

Nora wasn’t unhappy with my skimpy report; she was furious. Her eyes were black and ferocious, and her jaw jut out in a combination of insult and disbelief that seemed to snarl “How could you?”I do so wish I had taken notes that day–imagine, I was the one-man audience as one of the most celebrated wits of her era engaged in a no-holds barred attack, uncut and uncensored! We sat in her large, splendid kitchen, and went over the document word by word, with her exposing its every shortcoming. And my own as well! All I could say in my defense was “Ed said just answer four questions!”, which I believe I babbled at various times during her autopsy of my work with pathetic repetitiveness. It was torture, and she kept flicking the flesh off my bones for a half hour or more, long after she made her point.

I don’t blame her for being angry. She had a lot riding on the success of that film, and we had clearly screwed the pooch. And it might even be to her credit that she stood up for herself so staunchly. This week her many friends lauded her for her warmth and humor, but based on the day I saw how she treated a junior staffer when she didn’t think anyone was looking, I’d say she had her nasty side as well.