A few years ago I did a study looking at the use of field offices by the Obama and McCain campaigns in 2008. One of the findings was that Obama was absolutely overwhelming McCain in the establishment of field offices. (The Obama folks established over 700 offices nationwide, compared to fewer than 400 for the McCain team.) I had assumed that this difference was the result of Obama having so much more money to spend.

But look at what’s happening this year. I went through the campaign websites (here and here) to tally up the number of field offices in the 11 swing states I examined for my paper. Romney has no shortage of money, but Obama’s field offices outnumber Romney’s in each state.* 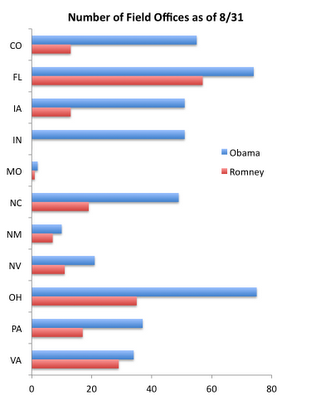 I had figured earlier that these differences were a result of the fact that Obama just had an early head start while Romney was still slugging it out in the primaries, but by this late date, I’m not so sure. It seems more like the campaigns have different philosophies when it comes to deploying campaign resources, with the Romney folks believing they can win in the air and the Obama folks believing this will be won on the ground.

It may also be that field offices are a better investment for Democrats than for Republicans. (Notably, my paper found that Obama’s 2008 field offices helped him win in a few states, while McCain’s didn’t help him nearly as much.) Democrats traditionally turn out at lower rates than Republicans; perhaps the field offices can help Democrats mitigate that. Also, field offices may be vital for Democrats in overcoming new voter ID laws by communicating voting requirement information directly to voters.

*I’m not sure what’s going on with Indiana. I find it unlikely that Romney’s team actually has no offices there at all. This could be a record-keeping problem.