In the wake of Mitt Romney‘s problems this week with remarks that he made at a fundraising dinner in May, Bloomberg ran an article about another swell dinner that doomed a Republican presidential candidate in 1884. According to an article by Richard John of the Columbia Journalism School, in October of that year, the GOP standard-bearer former Speaker of the House James G. Blaine of Maine, running neck and neck with Grover Cleveland, came to New York for a series of speeches. On the 29th, he attended a rally hosted by several hundred Protestant clergymen at which a Presbyterian minister denounced the Democrats as the party of “Rum, Romanism and Rebellion.” Unsurprisingly, the slur outraged Irish Catholic voters, who soon turned out in droves for Cleveland. But the real blow came that evening when Blaine, known in the press as The Plumed Knight, attended a sumptuous fundraising dinner at Delmonico’s, a financial district restaurant favored by high rollers. Among the guests, as John points out, were several of the richest, best-known and most politically connected businessmen in the country, including the Navy contractor John Roach and the financier Jay Gould. This enabled illustrator Walt McDougall of New York World to have a field day. His cartoon — titled “Royal Feast of Belshazzar Blaine and the Money Kings” — portrayed Blaine as a supplicant answering to plutocrats who dined on “monopoly soup,” “patronage” and “lobby pudding” while a humble laborer and his family looked on, begging for crumbs. 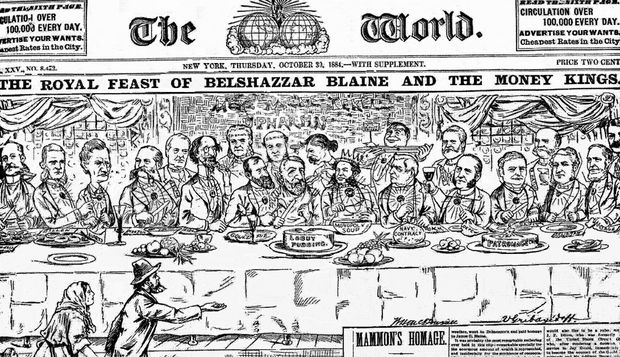 A few days later, when Cleveland carried New York by 1200 votes, the cartoon was credited with tipping the election.