Not surprisingly, they vote when the polls first open and shortly before they close. 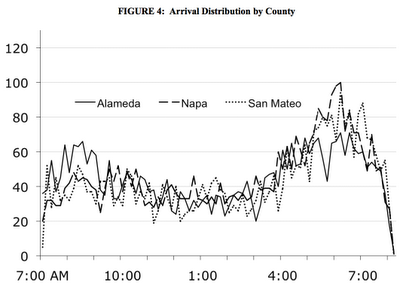 From a study of voting patterns in three California counties by Douglas Spencer and Zachary Markovitz:

This paper details the design and implementation of an Election Day field study targeting the operation of polling stations. This pilot study represents the first systematic attempt to determine how common lines are on Election Day, at what times of day lines are most likely to form, bottlenecks in the voting process, and how long it takes an average citizen to cast his or her ballot. We collected data during the 2008 presidential primary election in California measuring the efficiency of the operational components of 30 polling stations across three counties. During the Election Day, voter arrivals peaked twice: in the early morning and the early evening. Our data suggest that experienced poll workers are not more efficient than first-time poll workers. We also find that voters who used a DRE machine took a 1 minute 40 seconds longer to cast their ballot than voters marking paper ballots that were subsequently scanned.