A political observer could be forgiven for not noticing that there are more than 6,000 state legislative elections occurring tomorrow — the presidential race tends to suck up most of the available oxygen. But these elections will occur nonetheless, and they may profoundly affect public policy where you live. (For example, but for one state legislative seat, there would likely be a civil unions law in effect in Colorado right now.)

So, can we make any guesses about what’s likely to happen? I looked at Carl Klarner’s data on state legislative partisan composition and compared it to growth in real disposable income from the fourth quarter last year to the third quarter this year and produced the following graph: 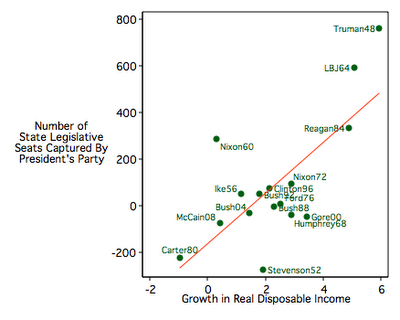 It’s a pretty strong relationship, with an R-squared of .526. And by the way, by this economic measure, economic growth this cycle is at 1.3% — that translates to 21 state legislative seats flipping from Democratic to Republican. This is not a lot of movement historically. State legislative seat gains also track presidential vote shares pretty well, and given that Obama is likely to get somewhere very close to 50% of the two-party vote, that translates to just about no change at all in legislative seat shares.

Of course, that’s just the broad national picture. There may be some interesting movements within states. As NCSL notes,

11 Senates are within three seats of changing majorities and nine houses are within five seats. However, election handicapper Lou Jacobson says a lack of a strong partisan tide from either party means less likelihood of the major control swings of 2010.

It looks like the state to watch right now is Arkansas, which is the last southern state to have a Democratic-controlled legislature and where both chambers are considered to be in play this year.

Update: So it turns out Princeton grad student Steve Rogers has written on this topic and has a nice paper showing how people’s evaluation of their state legislators is strongly driven by their evaluation of the president and the national economy. This, of course, kind of undermines the whole idea that elections are useful accountability tools for most public officials. Rogers’ graph below, showing how closely congressional and state legislative seat shares track each other, suggests that voters aren’t drawing great distinctions among elected officials and are rather relying heavily on party cues and evaluations of national politics.