Like a political Punxatawny Phil seeing his shadow, George Will has seen the president re-elected, Democrats returned to their majority in the Senate and Republicans to theirs in the House, and proclaimed four more years of winter, or at least gridlock. “A nation vocally disgusted with the status quo has reinforced it by ratifying existing control of the executive branch and both halves of the legislative branch,” Will writes in The Washington Post. “After three consecutive “wave” elections in which a party gained at least 20 House seats, and at a moment when approval of Congress has risen — yes, risen — to 21?percent, voters ratified Republican control of the House, keeping in place those excoriated as obstructionists by the president the voters retained. Come January, Washington will be much as it has been, only more so.” 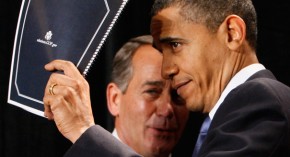 Well, that’s certainly the way to bet, but I would point out that already some things are very different than they have been since this date in 2008. For one thing, Barack Obama cannot run for a third term. Mitch McConnell cannot have as his principal political objective the denial of another Obama term. In fact, Ol’ Mitch is likely to have as his primary objective his own re-election, and just might need a few accomplishments to leaven his steady stream of negativity if he is to win himself another ticket back to the big leagues.

That applies to the entire Congress, the House included. Stopping Obama can no longer be the raison d’etre. Moreover, now that Obama doesn’t have to play to his left wing to get reelected, I expect him to inundate the Congress with a whole range of reasonable, middle-of-the-road proposals, and fairly force them to agree. (One remembers former Secretary of State George Schultz explaining why the Reagan administration was going to sign some nuclear reduction deal with the Soviets. “Sometimes,” he said, “you just have to take yes for an answer.” If Reagan could deal with the communists, surely John Boehner et al can deal with Obama.)

The other thing that has changed is that a lot of Republicans just lost elections–not only Mitt Romney, but also establishment guys like Tommy Thompson and weirdos like Muordock and Aiken. This should be a chastening experience. Hopefully more than a few Republicans will grasp that that they failed to defeat a president who has presided over a historically poor economy not because people weren’t open to making a change, but because the Republicans offered no change, merely a return to the status quo ante which failed so spectacularly. It seems to me that after eight failed years of the Bush presidency, followed by four years of failed obstructionism, it ought to occur to at least some Republicans that they need to have a hand in a few accomplishments, just so they can claim in elections going forward that they still do remember how to govern. Boehner may have been signaling this in his post-election comments. “Mr. President, this is your moment,” he said. “Let’s challenge ourselves to find the common ground that has eluded us.” We’ll see.