Economic growth and the vote for president, based on the most recent numbers: 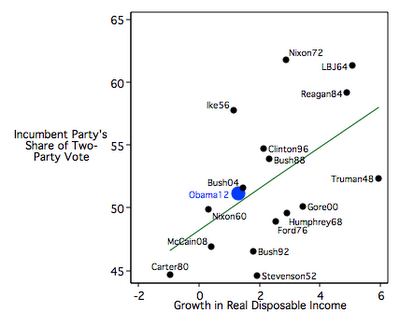 So, after all that money was spent, all those ads were run, all those voters were contacted by all those field offices, we get… an election outcome that you could have predicted back in July or earlier. So was this all a waste of everyone’s time and money?

No, not really. A large part of the reason the results are so close to the line is that the campaigns were pretty well matched. Spending, if you include independent expenditures, was remarkably similar across party lines. The campaigns largely identified the same states and the same demographic groups as persuadable and they threw everything at them. And they were both quite effective in turning out their bases.

And if the amount of money that went into this irks you, keep in mind that this is what it takes to inform and mobilize a large electorate. We can’t force people to read newspapers or watch the news, we can’t isolate them in a spin-free chamber to watch the debates, and we can’t have all of them meet the candidates one on one. To actually get some messages about the candidates’ relative virtues and vices to the tens of millions who largely don’t follow politics and have them use that information to cast a vote, it takes a labor- and money-intensive effort by the campaigns. They did this well.

And by the way, while Democrats certainly have many reasons to celebrate today, Republicans should be proud of the job they did on the presidential race. Incumbent presidents usually win reelection. They almost always win during a time of (even tepid) economic growth. Romney was trying to do something at which very few people succeed. That he came within a few percentage points of succeeding, and that he performed basically as the forecast models predicted, is the mark of a solid candidate and a strong campaign.

Pundits, conversely, have far less about which to be proud,