I have not yet read Sasha Issenberg’s book (it’s on my holiday wish list!), although I imagine there are still several books to be written about the use of social networking software by the presidential campaigns this year. This subject came up quite a bit at last week’s post-election panel here at the University of Denver. Sunshine Hillygus explained how the Obama campaign had hundreds of different search algorithms in their on-line advertising that combed through your computer’s browsing history and geographic information to assess what kind of message might resonate with you, and then selected one of hundreds of pop-up messages deemed most likely to affect your vote. In general, while both parties are making advances in this area, right now it seems like the Obama folks are simply more technologically advanced (and borrowing heavily from the social sciences), although whether this actually explains their recent victories remains to be proven. 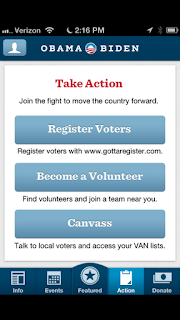 One recent advance that caught my eye is the Obama app (seen at left), which is a lot more sophisticated than their 2008 version. Click on the “canvass” button and it shows you a map of your immediate neighborhood and unites it with the VAN (Voter Activation Network) database developed by Democrats that lists the voting history and party registration of the people in the area. You can then knock on their doors using a suggested script, and enter information about their likelihood of voting and support for a candidate into the database, where it is instantly accessible by other activists. This strikes me as a very powerful tool, potentially untethering volunteers from their local campaign offices and allowing them to canvass wherever and whenever is most convenient for them. Judging from the campaign’s success this year, I’m going to guess that the technology wasn’t built on top of Apple Maps.

Another advance that amused me was the Obama campaign’s use of social pressure in its e-mail contacts. Here’s a message I received about a week before the election, when mail-in voting was available in Colorado: 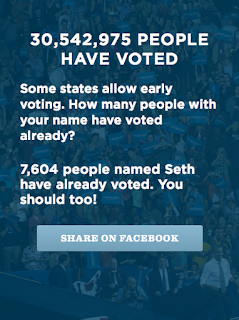 7,604 Seths have already voted! How can I not be one of them? Surely I am not worthy of the name if I do not vote.

Hey, anything to break through the clutter.