Nate Silver helpfully compiles voter turnout figures (so far) by state in last week’s presidential election. I’ve used those figures to chart the change in turnout since 2008, plotted against the state’s partisan vote in the election: 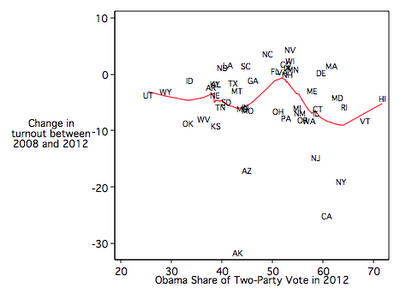 Turnout was down in most states since 2008, but the one area where we saw slight increases in turnout was in the states that voted right around 50 percent for Obama. In other words, the swing states. Yes, this is an effect of the Electoral College (or at least the winner-take-all allocation of electoral votes), which encourages the campaigns to concentrate all their resources in a few pivotal states.

A few states saw pretty dramatic drops in turnout. We can chalk up New Jersey and New York to Sandy. Alaska and Arizona probably saw turnout drops relative to 2008 since that year featured prominent home state politicians on a national ticket. Alaska also had a closely contested Senate race that year. No such drama this year. I really don’t know why California saw such comparatively low turnout this year, although Silver suggests that we’ll see big improvements in those numbers as more ballots are tabulated over the next few weeks.